Skip to content
In 35 years Africa will be the principal source of power for the world, right?

Yes, according to a consortium of African and European governments with considerable capital funding from world companies like Siemens and classified technologies from the German Aerospace Center.

And several days ago, this “pipe dream” notion rocketed to credibility when an important German politician/businessman agreed to become its CEO. Max Schön is Germany’s Warren Buffet, entrepreneur and former President of the German Chapter of the Club of Rome. Tuesday, he agreed to take charge of the not-for-profit DESERTEC.

The secret is not photovoltaic cells, wind turbines, wave captures or nuclear energy, and of course not any new found deposits of fossil fuel.

The secret source of the world’s next generation of energy is CSP: Concentrating Thermal Power plants. Giant mirrors are placed in the deserts of Africa and capture heat to turn salt-water steam turbines. Not only does the world get energy, but Africa gets desalinated water. 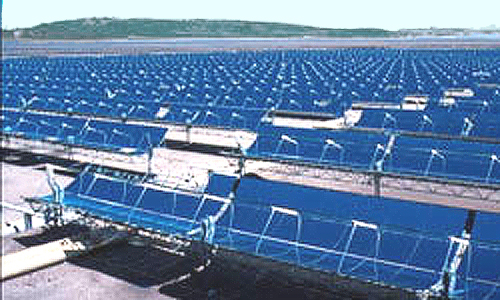 European countries are considering an investment of one billion euros.

If for some reason a sand storm or freak cloud interrupts sunshine, the turbines switch over to using either or as a last resort fossil fuels to assure a constant, uninterrupted supply of power.

According to DESERTEC, while the costs are high compared to current power sources, they are much less than solar panels. So backers see this as the logical next step; not solar panels.

Siemens is deeply involved because this company builds the high voltage transmission lines needed to transport the energy from Africa to Europe. Siemens is right now building these special lines in China.

CSP plants aren’t a new idea. They’ve been used at Kramer Junction in California since 1985.

I’ve often remarked that Africa’s time will come when a new source of energy is found. Is this it?