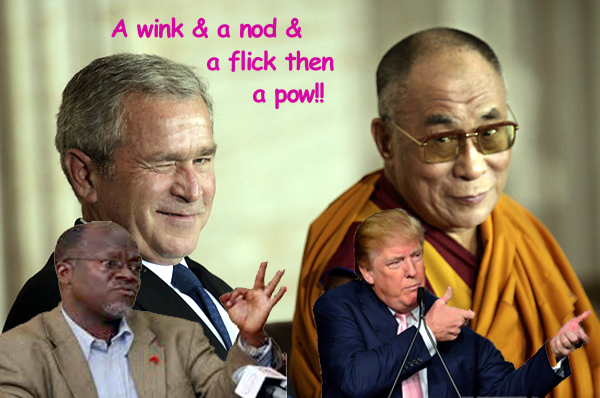 Words and gestures are gunpowder.

Tanzania’s leading opposition politician was sprayed with bullets yesterday as he arrived home from Parliament. It was a busy mid-day in the middle of a metropolis. The drive-by was a measured, obviously well planned attack. The police say they have no leads.

The president of the country tweeted that he was “shocked.” I’m not.

Tundu Lissu remains in stable condition in one of Nairobi’s most advanced hospitals where he was air-lifted in the middle of the night after being inexplicably kept in Tanzania for nearly twelve hours after the shooting. He is the main critic of the current dictatorial president.

“Do not test me,” Tanzania’s president Magufuli told a crowd in central Tanzania about a month ago, according to Reuters.

‘You know what I mean’ phrases, winks of the eye, and sometimes the more blatant statements by less intellectually disciplined leaders like Donald Trump (who boasted to his supporters that he could probably murder someone in Manhattan and get away with it) are not equivocating. We know what they mean to say. They know that we know.

And in that loop-de-loop of verbal cover they collude with Russia, steal from the treasury, and even commit murder and get away with it.

President Magufuli tweeted that he was saddened as well shocked by Lissu’s shooting and urged the police to “bring to book all those who are found liable.”

Last year was pivotal for non-violent democracy worldwide. The Economist concluded that “threats to democratic rule [in Africa] are growing” and the Guardian’s Global Development unit corroborated that: “Democracy is not spreading across Africa.”

I think we Americans can conclude as well that last year was also a setback for our democracy.

One of the reasons for these setbacks are the powerful words flooded on increasingly aware but also increasingly pliable electorates. I think the reason electorates are suddenly so impressionable is summed up in the expression, “fed up.”

Certain issues have dogged Tanzania and America for too long. In Tanzania it’s corruption. In America it’s class/wage stagnation.

Politicians have been very responsive to our fedupedness: there’s a ton of lip service in every politician’s briefcase. But either they aren’t serious, or they’re inept, or worse, deceptive, because there’s been no palpable change.

Tanzanians are off-the-wall furious with the number of police checks on their roads. Recently while driving from Kilimanjaro airport to Arusha town (30 miles) my car was stopped 4 times! Ostensibly to check the tires, the headlights and the car’s registration. But effectively for a two thousand shilling pat in the palm each time.

Americans have struggled now into a third generation of wage stagnation. They’ve watched the very rich get hyper rich swinging on their yachts’ hammocks while the rest of us expand our work week with more hours and multiple jobs so that “the economy continues to improve.” For whom?! It’s hilarious.

So Tanzanians and Americans alike are fed up. So we’ll take a chance and put into power an unknown quantity, which was absolutely the case with both Magufuli and Trump. And once enthroned, we’ll do whatever they say, because we’ve got nothing else to try.

So a wink about maybe defying a little law. Or a nod past an adversary. Or a flick of a journalist. Or a nod to some bar buddies with guns…