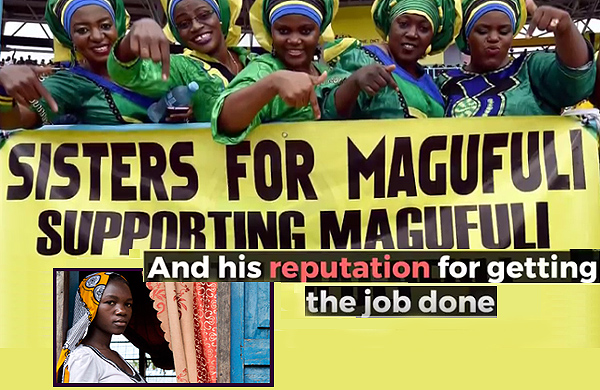 Tanzania’s crash to the right has been phenomenal. Why do so many Tanzanians support it? That question goes a long way to explaining a lot of the world, not just Tanzania.

Tanzanians who had been roughed over by police, bureaucrats and corrupt politicians now see some relief under President John Magufuli. He couldn’t do this through the democracy that existed in Tanzania, because it was corrupt. Magufuli has become what we used to call a “benevolent dictator,” and it’s what the whole wide world craves today.

Magufuli rose from an unknown party apparatchik to becoming one of Africa’s strongest dictators in less than five years. He’s more or less finished his assumption and is currently sweeping up the debris:

Parliament is eviscerated. In fact Parliament has been exiled to a remote interior part of the country that doesn’t even have a good road to it, no rail line and no airport. The media has been subdued with its most courageous reporters killed, missing or jailed.

Infrastructure is booming. No longer restrained by some parliamentarian’s concern about Chinese foreign investment or multinational mining of conservation areas, it’s full steam ahead on giant dams, mines, roads and railways.

Tanzanians like that. Of course few know how the Chinese took over lock-stock-and-barrel Sri Lanka’s only major port when the country failed a debt payment. But even when they do they point to the enormous resources of uranium, titanium and gold that will now be mined.

No chance under Magufuli that the country will miss a debt payment!

So the social fabric and the economic balance sheet actually look pretty good. That’s clearly why the Tanzanians support Magufuli. “He’s getting things done,” and many feel more justly than before.

What is suffering is human rights, and that gets to the crux of the connundrum.

Whether it’s voting rights, speaking rights, business rights, land rights or tribal rights or conservation rights – forget them, they have all but disappeared from Tanzania.

And now, even the rights of women to their bodies.

Several months ago Magufuli announced that pregnant teenage school girls would be expelled from all state schools, which is the vast majority of schools in the country. While there was some serious pushback against this, most of Tanzanian society accepted it and supported increased education for birth control, instead.

The pushback, however, caused Magufuli to address the other half of the equation, and any person convicted of impregnating a school girl who isn’t married can receive up to 30 years imprisonment.

A wide global coalition for human rights aggressively condemned these actions. But based on their previous opposition to Magufuli’s new homophobic laws, it’s not going to matter.

Trying to get into the head of Magufuli on this one is difficult. There’s no question that the amalgam of western technologies and ideologies with traditional African cultures causes a lot of older men like Magufuli a lot of consternation.

It’s also clear these “modern notions” are grabbing the old mens’ attention, but they have yet to be moved in anything but a backwards direction. The Tanzanian government went to great lengths to recruit women to publicly support Magufuli. “Sisters for Magufuli” was a patent government program. There was no attempt to suggest it was organic.

So women suffer in Tanzania. There’s no question Tanzanian women have not benefited from Magufuli’s rule, as they have in Kenya or South Africa from recent democratic reforms which have greatly increased their power. The role of the woman in Tanzania is slipping backwards.

This seems to be an excellent example of a social wedge that is cleaving many world societies today. Women activism (and not yet stale LGBT activism) divide many from their fellow citizens who support the quick-decision, iron-rule of nondemocratic government.

Is there something to make of this?