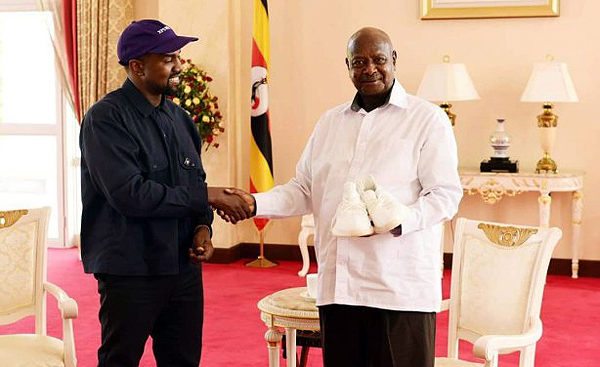 No, Ugandans, Kanye West will not boost your tourism. In fact, he’s done exactly the reverse.

West and fellow Trumpian Kardashian arrived Uganda yesterday with their children, then held an ego exchange with its President-for-Life, while guests who were residing at the country’s most prestigious safari lodge, Chobe Lodge, were told they had two hours to vacate.

At the conclusion of the egofest in the presidential palace, West flew to a distant western lodge in a private aircraft. The entire 70-room lodge was turned over to West, his family and his fellow “artists” who will be completing a new album there. Lodge officials were told that West would occupy the lodge at least through October 19. It was not clear who was paying for it.

Education is based on facts, and the less educated either dismiss facts, fear facts or don’t take the time to figure them out. Trump has validated this behavior, and his supporters like Kanye West have embraced it because their own support also comes from the same group of less educated Americans.

A higher educational level has always been associated with those who obtain enough disposable income to take distant foreign trips. You won’t find the chest-thumping, hat-wearing, lock-her-up shouting rioters in a Landcruiser on the African veld.

Besides, virtually all safari travelers – American or otherwise – are unlikely now to book a safari lodge that dismisses their patronage for a flash-in-the-pan celebrity. Marasa Africa who owns Chobe Lodge is likely to take a significant hit.

Museveni is Africa’s oldest and most ruthless dictator. For nearly three decades he has run the country with a conservative iron-fist that has routinely been supported by the American right. His opponents are dead or maimed for life. There is no effective public media. Uganda is Museveni.

This fits the small thinking ideas of the less educated. It’s a lot simpler to have one autocratic guy calling the shots than dealing with all the sloppy moralities of democracy.

Sorry, Ugandans. West has done you no favor.