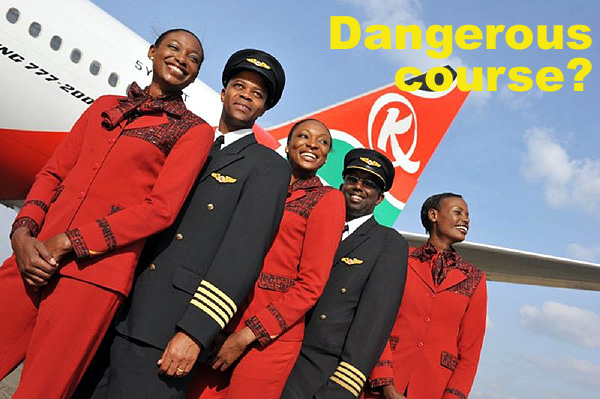 Will Richard Quest get home? Quest is in Kenya for the inaugural flight of Kenya Airways from Nairobi to New York, Sunday. This fireworks affair for the Kenyan nation is now immolated by airline workers threatening to strike.

For the third year straight Kenya Airways edged out all other African airlines – including headliner South African Airways – for top awards for its economy and business classes, as well as overall airline. But until now, its stellar service hasn’t included flights to the U.S.

Kenyan airline workers charge that their long-haul pay ($50/hr) is egregiously lower than the world standard ($197/hr). They’re also demanding that previous agreements with the airline be fully implemented.

Tuesday, they announced they would strike the inaugural flight.

Long-haul routes to the U.S. from Africa lose money. Delta, South African Airways and Ethiopian Airlines run nonstop service to Africa from Chicago, New York, Atlanta and Washington DC, but only Ethiopian — which runs the most service — has proved some routes profitable.

The routes are prized as lost leaders by African carriers and operated begrudgingly by America’s Delta. All the African airlines justify the unprofitable route boosts its connecting and downline services which are profitable.

Delta has operated its service reluctantly for ten years.

Pan Am initially operated the route for years. I remember flying the 24-hour service that began in New York, stopped in Monrovia, then Abidjan, then Lagos and finally arrived Nairobi a day later. Because the airline made so many stops enroute, it was arguably profitable.

When Pan Am collapsed United inherited the route but absolutely didn’t want to operate it. But President George H. Bush – all excited about the ending of apartheid in South Africa – got it into his noggin that America had to compete on the Johannesburg route that was at the time exclusively operated by South African Airways.

United’s CEO Stephen Wolf was a major Bush supporter, in no large part because Bush had steadfastly maintained and in fact increased the deregulation put in place by Reagan, often in opposition to Congress.

A Chicago advertising executive, Keith Bates, and I were called into the CEO offices of United’s Stephen Wolf in May, 1992, and tasked with quickly coming up with adjuncts to their marketing plans that would include safaris.

It was a grand time, for sure, and lots of fun. But creating a safari program to complement the airline was small business compared to the operation that United set up in Johannesburg: ground staff, a repair hanger, warehouses of spare parts and the local marketing offices. Hundreds of paid staff.

To our great chagrin Wolf suspended the effort in August. The company’s stated reason was the continued practice of apartheid, but by then Mandela had been released and it was clear the country was reforming.

The real reason Wolf suspended the effort was because Bush’s fate had declined because of his “No New Taxes” remark that was being hit hard by Democrats. The inaugural United flight scheduled for January, 1992, never happened.

Ultimately United sold many of its old Pan Am routes to Delta. Delta sat on the routes for more than ten years, knowing they weren’t profitable. But then Delta merged with the European airline, KLM, and KLM had a big presence in Africa.

So Delta announced in 2007 that it would begin service to Nairobi and Johannesburg in June, 2008. It operated the Nairobi route for hardly a few months before dropping it, but the Joburg route has continued ever since.

These routes may, indeed, provide profitability to downline service, but they are incredibly expensive to operate. The total cost to KLM, for instance, traveling from New York to Amsterdam on one flight, then Amsterdam to Nairobi on a second flight, is less than half what Kenya Airways will show as cost on a single flight to New York.

And fares are governed by the market. No one will pay twice as much to get to Nairobi in what amounts to only a few hours earlier than flying through Europe. Take a string to the globe. It’s only 300 miles more and 55 minutes more airtime to fly to Nairobi via Paris on two flights from New York than nonstop (7660 vs 7359).

The president of Kenya has been as forceful in his support of the route as George-H was a quarter century ago.

“I encourage Kenya airways to scale up its services and become the airline of choice in a very competitive industry. My administration has given you a strong platform to excel,” the President assured American business leaders in New York last month.

But will the union agree? I wonder what Quest has to say about all this?