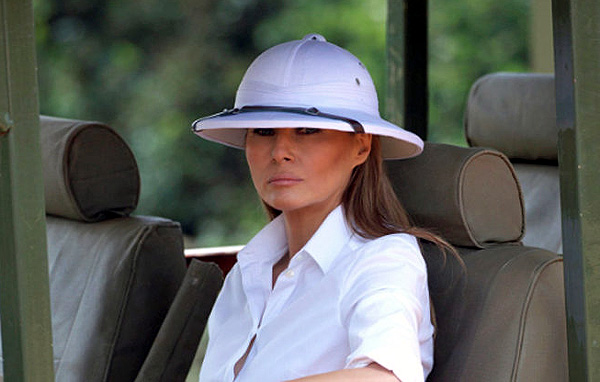 Melania Trump’s week-long trip to Africa ended in disgrace. Two of Africa’s most powerful women, one in Nigeria and one in Kenya, bitterly criticized her for coming, going so far as to call her a “racist.”

Why? Because she was wearing a pith helmet?

Colonials hated pith helmets. They were heavy and hot, grated foreheads to blisters, impossible to clean and horribly difficult to fit. But they were a necessity for white people whose skin couldn’t endure the relentless equatorial sun.

Stanley came up with what he alone thought was a more comfortable alternative: a linen cap with ear coverings, but most people felt that was too hot and his front flap wasn’t strong enough to cast shade beneath the eyes.

When new synthetic materials were discovered during the two world wars, pith helmets quickly disappeared. Strong polypropylene strappings extended thin hat edges far enough over the face to cast a large shadow, and nylon and other synthetics repelled the dangerous African ultra-violet light even better than the woven canvass of the pith.

Pith helmets were retired just as African countries began to get their hard fought-for independence, so it was natural and correct to associate pith helmets with oppressive colonialism.

When as a young 30-year old guide I found an antique pith helmet in a Nairobi shop, I thought it would be cool to wear it for my next group.

My Nairobi manager’s evil eye took it off my head before I could. It now sits atop one of my bookcases at home. I never wore it on safari.

When Melania Trump arrived Africa, she was wearing a pith helmet.

“Standing in front of the Great Sphinx in Egypt Saturday”, according to NPR, she then told reporters, “I wish people would focus on what I do, not what I wear.”

Almost immediately, Kenya’s most powerful elected woman and high party leader, Martha Karua tweeted, “And what do you do madam?”

By the end of the week, the pith helmet reluctantly disappeared, but it took several days of continued criticism.

So by the end of the week Melania had a lot more enemies than friends. Acclaimed Nigerian author, Chimamanda Adichie, told Esquire Magazine-UK that she thought Melania was a racist and then explained:

“I just watched an interview that she gave and I was just appalled… She sort of stepped out of a colonial 1750 guidebook… There’s a pith helmet and then I am thinking maybe this is supposed to be ironic? Maybe it is a critique of colonialism. She really thought this is what you do when you go to Africa and it says something about someone who is so removed from reality.”

Even Laura Bush rattled Tanzanian society by opening an “International Womens’ Summit” in 2014 exclaiming “that the inclusion of women in every part of a society and a nation makes for a more prosperous and stable world.”

Ms. Bush went on to challenge African societies to emulate American heroes who “were arrested and some were even beaten… Yet they continued to stand silently, day after day, holding up banners that read: Mr. President: How Long Must Women Wait for Liberty?”

Little attention was given to that, because “in those days” it wasn’t unusual.

How long ago “those days” seem.