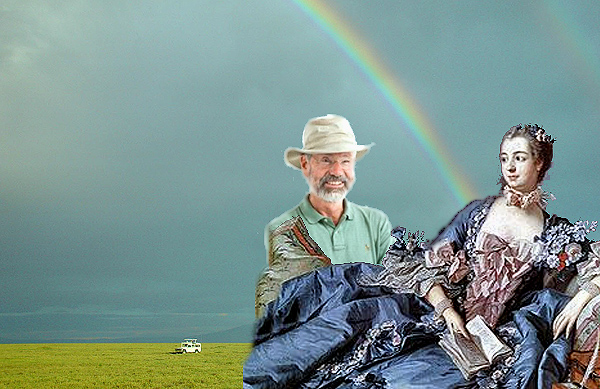 Rwanda was first: hike the hourly fee for visiting a mountain gorilla to $1000. Tanzania followed: Two years ago the fee was $35/day in the Serengeti. Today (linked to where you’re staying), it’s $100.

The wilderness has been reserved for the rich. You know the rich don’t like to mess around with the hoi-polloi. Clear the Serengeti of teachers, laborers and clerks, and the parade of Gucci clad inbreds will arrive. And the eminent conservationist, Craig Packer, is thrilled.

Craig Packer was the world’s most important lion field scientist until he was summarily kicked out of Tanzania by authorities upset with his hardening position against sports hunting. This year’s Oxford Dawkins Award Lecture was given by Packer who essentially argued that the wild will only survive if the rich pay for it.

I doubt that he would question this simplification, although I’m not sure he’s happy about it. But more importantly, I don’t think it’s true. I’m terribly disappointed with Packer who seems to have returned from the bush with a chronic rash of whistling thorns.

If the world’s great wilds are not kept accessible to everybody of any income level, then they will disappear. This is simple arithmetic. There are fewer and fewer rich and more and more nonrich. The nonrich will ultimately move the levers of power.

Packer, on the other hand, thinks that the only revenue streams that can save the wilds come from the pants pockets of the particularly rich, the “eco-philanthropists” that he so intones. Imagine if the wild starts to be treated like perfume. If the Serengeti falls out of favor it will be a bit more difficult to bring back than Chanel No. 5.

The wild must be preserved for its biodiversity, and in today’s modern politic the rich alone cannot provide sufficient support. Europe is a far better example than screwed up America, right now: it is precisely Europe’s hoi-polloi that politically and socially supports most of the green movements there.

Of course Packer is correct that we’re in a crisis. African countries “are going to need all the help they can get to cope with the coming wave of humanity,” Packer told an Ugandan reporter.

He argues that the human/wildlife conflict has reached a threshold likely triggered right now by climate change. This conflict is not in dispute. Even in areas, for example, where wildlife has been decimated local African populations feel unfairly disadvantaged by it.

This is simply because elephants are too big, lions are too deadly and buffalos too heavy, in the context of growing human populations and their basic needs. The animals are getting in the way! No dispute about that!

Packer points out how different this was early on, when wildlife tourism was a principle revenue stream for many African countries and when the wilderness cost a lot less to protect than it does today. The increased revenue from tourism over the years can’t begin to compare with the explosive new revenues in mining, modern agriculture, finance and technology.

All this is true; it’s just amazing that this grand man of science who I’ve followed so earnestly over the years has morphed from a scientific advocate into a courtesan. His arguments for saving the wild could be just as easily applied to medical research, high-speed rail, space exploration or anything that costs more than it’s easy to explain to the average Joe.

Saving the wild in my view is no less critical than any of those, and they are all grand social missions that entire societies, not “eco-philanthropists” will ultimately undertake. Perhaps some day when we reach another galaxy and all the universe’s diversity opens to us, the extraordinary efforts we must employ now to maintain our biodiversity can be relaxed.

But there will be a few more Dawkins Lectures before that comes about.