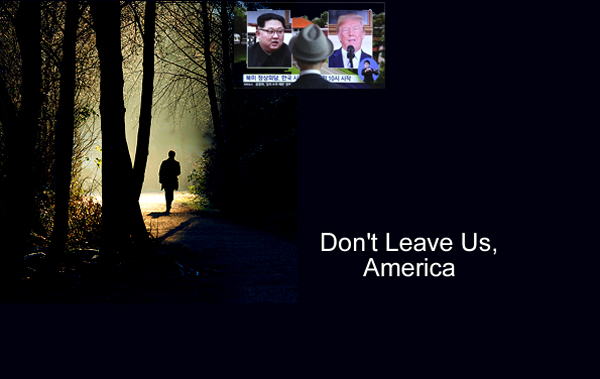 Only one country in the entire history of humankind has voluntarily given up a complete, modern nuclear arsenal : South Africa. And they did so even while the one other country being asked to do so at the time, Israel, refused.

Times were much different in 1991. Virtually all South Africans agree, today, that they took the right decision. They retain a robust civilian nuclear industry that supplies much electricity, they are leaders in nuclear science, but the missiles of the world are not pointed at them.

So do they think North Korea can be convinced to join them?

“The problem is,” writes Macharia Gaitho, Nairobi’s most respected columnist, today, “only a fool would take seriously any pact with the US megalomaniac.” This is a Kenyan talking about Trump.

South Africa’s complicated denuclearization agreement was one of the most difficult ever implemented by the international community. It took years to accomplish, it revealed South African security to the world and it even caused tremors within the inspectors for fear new secrets they learned would be leaked.

But as we all know it came at an extremely unique time, the ending of apartheid. Two years after denuclearization began, so did the process of unwinding apartheid. Most observers feel the president at the time, F.W. de Klerk, planned this all along.

Perhaps, skeptics claim, he feared a nuclear arsenal in the hands of anti-whites. Perhaps, supporters claim, he was creating a rainbow nation free of much of apartheid’s terror, and that’s what history has so far decided. De Klerk received the Nobel Peace Prize.

Whatever the explanation you would be hard pressed today to find a South African who is not glad his country is without nuclear weapons. Being a part of the nuclear weapon club means little except that you will be among the first destroyed.

So do Africans think that North Korea will follow the lead of South Africa?

“President Trump’s proudest accomplishments have been abrogating a whole slew of treaties and agreements entered into by his predecessors… The rest of the world now clearly understands that the American word is not its bond; that any solemn agreement signed with the most powerful nation can be torn up without ceremony.”

Gaitho’s foregoing analysis says it all. If you can’t rely on a trade deal, or the climate accord much less showing up on time for meeting, who would dare make a nuclear weapon’s agreement with Trump?

Obviously no one, and obviously not Kim Jong Un. Except…

…Trump’s supporters, which I think we need to rename “believers.” The third to slightly more of America who blindly follow him like a cult leader will believe anything. The frills and makeup were successful this time, too. Didn’t you see the two of them together?

Harry Truman’s refusal to use nuclear weapons in the Korean War, despite all his military advisors arguing otherwise, showed he was human enough to feel horror and regret at what he did in Japan.

My children as little kids argued this premise and continue to do so today as adults, as our 33rd president must have argued it with himself to his grave. De Klerk may have had ulterior motives but certainly he, too, must have felt the conundrum in his gut.

Trump and most of his believers don’t have a developed enough memory to begin to understand Hiroshima or the intellect to understand any type of annihilation if it doesn’t play on an Xbox. Trump’s power and the support by his believers hovers outside this terrifying human experience.

Perhaps, they could argue as they have with the holocaust or Obama’s birth, nuclear war isn’t as bad as you think.

In this context playing with agreements over its use or nonuse is madness.