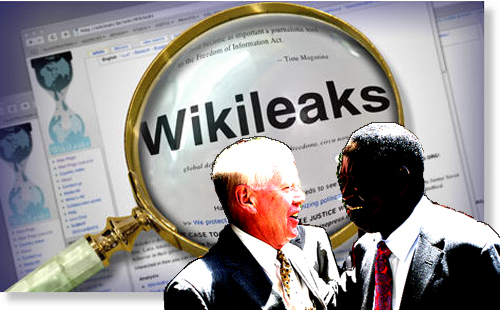 The several thousand WikiLeaks about East Africa so far tell us very little that we didn’t already know or deeply suspect. I actually find it rather refreshing.

Basically, East Africans are publicly affronted by the frankness with which Wiki frames the obvious failings of East African leaders and their positive actions as American motivated. And basically American diplomats are shown as being a bit more juvenile than adult when it comes to getting (or not) their way.

Wiki basically shows that the Big Boy got his way with the little toughs. Good. I’m glad we did. And I think most East Africans are, too. From time to time, the Big Boy ain’t so bad.

American policy in East Africa from the end of the Bush years through the present has been right on as far as I’m concerned (except for one significant item: the soon new Southern Sudan.) In the main, an A- overall.

But Wiki takes the charm out of the politics. When all the polite language is peeled from the events, when “convinced” becomes “bribed” and “suggested” becomes “threatened” there’s no question any more that American power bludgeoned its way in East Africa over the last few years:

We bribed Kenyan leaders to be democratic and we bribed them to fashion a more moral constitution. We threatened sanctions if they didn’t bring the proposed new constitution to a vote. We targeted Kenyan youth with a campaign not dissimilar to Obama’s get-out-the-2008-vote, because they were the most energized and least likely to actually vote. And so we got them to vote ..the way we wanted (which was the right way).

We raised a normally behind-the-scenes ambassador to a very public level. We did everything short of leaking ourselves the names of top Kenyan politicians we believed were principally responsible for instigating the violence following the 2007 elections, to the point that these guys became so universally known that real criminal prosecutions against them in The Hague may begin shortly.

Once outed, our ambassador was given other public tasks we hailed as “transparent.” When food that we were delivering to a famine area of Kenya was delayed at the Kenyan port of Mombasa because the bribes paid to off-load it weren’t enough, our dear ambassador took a camera team onto the gangways and started off-loading the grain himself.

We lamented that so much time had to be spent with Kenya’s growing up into a full democracy that we have let Uganda and Tanzania slide. But that doesn’t seem to matter, because they are neither as powerfully geopolitically or as economically powerful as Kenya.

OK. Take a deep breath. Wiki just ratted on the Teacher to that troublesome but promising Pupil. The rest of the class (Tanzania & Uganda) always knew Kenya was the favorite and that it was a tense relationship.

But it’s working, if you concede that current American interests are almost as vital to East Africans as Kenyan interests. I do.

So… This has all been good. Good for East Africa and good for America.

So, WikiLeaks, what was bad?

What Kenyans are currently all upset with is the derogatory name calling carried by U.S. diplomatic cables. Both the president and prime minister of Kenya are called beneficiaries of a network of old boy corruption “feathering” their fortunes “with impunity.”

That’s not news. It’s been said in public by many former officials world-wide, much less Kenyan journalists themselves. Frankly, I think this, too, is changing although it was much less evident earlier this year than now. So, anything else, Wiki?

We and Britain publically decided to embarrass Kenya in October, 2008, when a ship carrying 33 Ukrainian T-72 tanks was hijacked by Somali pirates, then freed (after ransom) off the coast of Kenya. Kenya claimed at the time that the tanks were for Kenya, despite journalists claiming otherwise that the Kenyans were creating a corridor for arming southern Sudan.

As then, I still have this intuitive feeling that we’re involved in this, but Wikileaked cables suggest we were affronted by the revelations. The cables paint Kenya as the culprit and us as the surprised school-mom and either way, this is enraging Kenyan leaders who are working so hard to making the January, 2011, elections in southern Sudan work.

I don’t like war, anywhere, but without some military hardware southern Sudan will not survive any attempt at Independence.

Wiki also underscores something I’ve been saying for a long time: China is beating America at the Africa game, the East African parlor in particular.

There’s a lot of name calling, again. One top diplomat, Johnnie Carson, referred to China in Africa as a “pernicious economic competitor with no morals.” (Agence France Presse). “China is in Africa for China,” Carson said as well to a group of Nigerians, insisting there was nothing moral or altruistic in their very large recent economic involvement in Africa.

Why is the U.S. involved in Africa? To bring righteousness and moral rectitude to the Dark Continent? Why did Stanley broker for the malicious King of Belgium? Why has any foreign government ever been involved in Africa… or anywhere else foreign for that matter?

In diplomatic niceties we say “self-interest.” When the niceties are dropped, Carson goes on and on castigating China for trying to buy UN votes and other allegiances, something that America is the ace at, especially during the Cold War.

I think this is revealing. I think this is something we as Americans should study. What these leaks reveal in the unrelenting American diatribe against China in Africa is that we’re jealous. We don’t have the cash, anymore, and China does. For years – especially during the Cold War from our government, and right until the economic downturn from our megamonolithic corporations, America spent more in bribes than anybody else.

We’re jealous. But the great revelation is the following:

China is spending OUR money. The money from the purchase of toys, car parts, solar panels, and kitchen utensils.

It’s ironic and terribly revealing. We’re still bribing, but not necessarily in our own interests. Rather, in China’s.