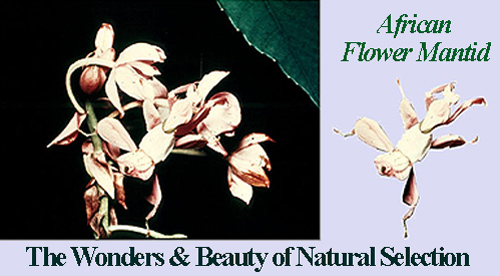 In this age of belt tightening and budget angst the impoverished State of Kentucky is going to give $37½ million dollars to a wacko anti-science group to build a creationism theme park.

Sub-Saharan Africa is the cradle of mankind. The earliest known hominid, our direct evolutionary ancestor, is at least 6 million years old. Olduvai Gorge, where so much of these marvelous discoveries were made, is top on my list of things to see on safari.

Natural selection is not immediately intuitive. It takes some study. But once you get into it, the rush is unbelievable! The majesty of living things, and man’s unique position within that, is awesome. Complexity and simplicity seem to merge in an array of life forms that is unbelievable.

No doubt what many describe as art which consumes and inspires is relational to the patterns and designs of the natural world. “Beauty” is natural engineering at its finest. To me much of the greatest beauty of the world is in Africa, where it just stands to reason, so much of it began.

Roll your cursor back and forth over the graphic below. African flower mantids have so remarkably adapted to African flowers that without a graphic like this one you’d never in a million years find them! This is beauty, complex mathematics and natural selection all rolled up into a powerful single lesson.

I’ve labored for years with people and clients who don’t believe that natural selection explains life on earth, most of whom squander in the cartoons of creationism. Only 39% of Americans believe in evolution. This is worse than embarrassing. There is no other educated population in the world with such a miserable statistic.

And the number is increasing, not decreasing. We’ve countered the limited beliefs of the critics fact-by-fact. We’ve politely and consistently tolerated the position of those arguing against evolution, giving “equal voice” to nonsense. I know, now, how wrong that was.

Creationism is wrong. It’s a lie. It’s perfectly legal to believe lies, so I’m not so insane as to suggest that people who believe lies should be somehow punished. But the time has come to firmly not reward them.

Kentucky already has a Creationism Museum that commercially is doing very well. It’s not certain and will never be known if its financial success is for the same reason that people used to pay to go to freak shows, or if there really are believers in support. But either way, institutions like it should not be subsided by public funds.

In other words, I guess we can tolerate lunacy but we sure ought not support it.

The weakness with which scientists, teachers and politicians have defended such concepts as natural selection against fringe idiots has produced a terrible legacy. Natural selection is just one of many issues like woman’s rights and child poverty and national health care that have suffered in my lifetime because their advocates have cowered to baseless critics.

Our legacy of poor defense has resulted in the U.S. dropping from Number 1 when I was in high school to 18th of 36 nations whose high school students graduate on time.

And those who do graduate are getting dumber and dumber.

As you enter the gates of the United States Grand Canyon National Park, you can purchase in their shop a “guide book” that says the Grand Canyon was formed by Noah’s flood and is only a few thousand years old.

In the last year alone, the Texas State Board of Education has ordered text books used in public schools there to question the American separation of church and state, to remove Thomas Jefferson as an influential political philosopher, to study the “unintended consequences” of Affirmative Action and Title IX, to replace “capitalism” with “free-enterprise system” and to describe the U.S. government as a “constitutional republic” rather than “democratic.”

This is the state of education in America. It has struggled to reach this nadir for more than a generation. We have allowed it to sink, because we haven’t defended with the vigor of certainty that which is science.

There is a lot of talk these days about compromise and purism. We made a mistake in my life time by tolerating as equals those who disbelieved evolution.

I don’t know if there’s time to turn it around. But if there is, there can be no compromise on the struggle.