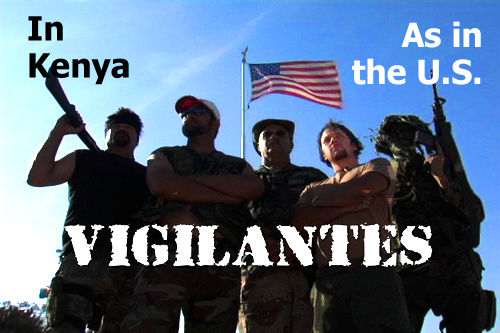 Everywhere in the world crazies are sprouting from the misery of the economic downturn. And we should take note particularly with what’s happening in Kenya.

Kenya may be the most dynamic emerging society in the world. It ended a mini-revolution with an imaginative coalition between radically different sides, then passed a new, modern constitution that in my opinion is an universal model for morality, human rights and dignity.

We may have an embarrassing one out of six Americans in poverty but Kenya’s is much worse off. It’s likely closer to one out of two!

But poverty in Kenya is a strata quite different from in the U.S. A huge portion of that half of its population still lives relatively calmly in subsistence, not in dependence of society as American poor, do.

But a growing portion of Kenyan poor are amassing in bulging slums surroundings its cities. And in these cesspits of humanity, political awareness and higher education combine in volatile ways.

That was why there was such violence after the contested election of 2007, an election which pitted two very different men against one another. It is very fair to call that an election one of the poor against the rich.

(It is also why the resolution of that conflict was so astounding. Of all the opposites in society, none is as irreconcilable as rich vs. poor.)

Rich versus poor is a pretty simple concept. In Kenya, as this fire burned, it morphed into Luo versus Kikuyu, tribe against tribe. An economic controversy has all sorts of academic qualifiers. Ethnic ones don’t.

What was a panoply of issues with lots of gray between, became black and white. A rich man could argue that the poor will get richer faster if they let him get richer, first! And the poor could argue that their drain on society impedes the rapid growth enjoyed mostly by the rich. So each side is blurred. Each side attracts advocates from the other.

But you can’t change the way you’ve been born. A Luo can’t convince his neighbor the Kikuyu that they share physical genes. That battle was demarcated by god.

That hate is more than visceral, it’s innate.

And it has lead in Kenya to vigilante groups springing up throughout the country. This is now Kenya’s greatest social problem.

And when one vigilante group grows very powerful and successful, a remarkable transformation albeit transitory occurs: Society as a whole begins first to tolerate, then later, embrace the thugs. It’s so simple, so nice. No complicated qualifiers, just a mafia leader to tell us what to do.

Mungiki is Kenya’s mob. Born in the slums, its leaders now live in grand houses and control huge businesses. From time to time the government indicts them, or even brings them to trial, and most of the time juries find them guilty of nothing. It started as a Kikuyu-based vigilante group. But today it reins across different cities the way mobsters did in the first half of America’s 20th Century.

There are places in Kenya where it’s impossible to become an elected official without the support of the Mungiki. And you know what that means.

And there are more and more wannabees around the country. Two days ago in a remote area of western Kenya, far from Nairobi and the Mungiki and modern life, 50 youths calling themselves “Sungusungu” stormed a village and hacked to death four people, then trashed their homes.

Sungusungu claims it was avenging the recent murder of a Kenya Assemblies of God church pastor, Mr Michael Onchong’a Nyakundi.

Yes, religion is an easy infusion into these vigilante movements. Ever watch the movie where the mob leader regularly goes to mass?

Kenya has an advantage in this stage of its development that America didn’t have during the years of prohibition. It has more facts, more history, more outcomes that proved how counterproductive the mob was over the long run. Kenya knows from America’s history that vigilante society is self-destructive and ultimately puts itself out.

And while these may be somewhat illusive concepts, they’re real enough I believe to help Kenya get through this period faster than we did in America.

Oh. Did we get through them?