Skip to content
As if you didn’t already know, it’s official! This year Africa (Cape Town and Nairobi in particular) saw the highest hotel price increases in the world!

Last week the HPI Index was released by the UK company, Hotels.com. Their biannual report is one of the most accurate and heavily used in the industry.

Of the 15,750 locations surveyed, the Number One city with greatest increase in cost from last year to this was Cape Town (54%), the second was Shanghai, and the third was Nairobi (31%)!

What is even more telling is that both Cape Town and Nairobi are inching their way up into the top ten most expensive hotels in the world. Right now, Geneva holds that rank ($232), but Nairobi is $216 and Cape Town $180.

Overall, world prices have recovered only to where they were in 2004. They peaked in the third quarter of 2007, at that time 20% higher than 2004. World-wide, therefore, prices remain depressed by about 18% from before the economic downturn. 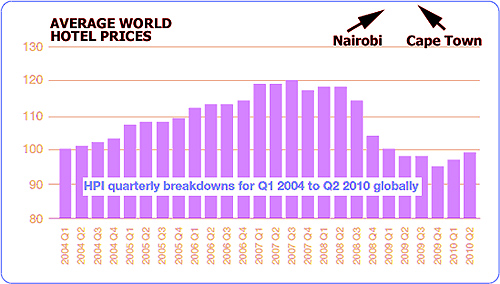 But not African cities! Why?

China is investing so incredibly heavily in Kenya that it’s pushing up all prices related to visiting one of Kenya’s principal cities (Nairobi or Mombasa). You can’t build a road or drill an oil well without thousands often tens of thousands of builders and consultants that need a place to stay.

And a close second is the marvelous turnaround Kenya has pulled off in the political arena: a new constitution is in place. The city has attracted some of the world’s most prestigious world conferences as result, with tens of thousands of delegates.

My prediction isn’t rocket science. I think Cape Town will slip (there isn’t another World Cup coming into town) and Nairobi will stabilize but continue its slow growth upwards.

As for safari prices, I think they will start to disentangle themselves from the anomalies in their cities. 2011 will be a good year for safari vendors, but not as good as 2010, so I think we’ll start to see an end to increases if not actual drops in prices by the end of 2010.

For those of you thinking of going on safari, though, I’m not sure you’ll notice anything. In fact, American resellers increased their costs three or four times greater than the hotels in 2009. This is because they had so heavily discounted them during the economic downturn.

So for the end-consumer, I predict prices will remain the same. What we may see, though, is a return to the great last-minute deals that characterized 2008 and 2009. These were often restricted to same company safaris or very specific lengths of stay, but if you could tolerate the lack of flexibility, it often meant savings of up to a third.

These were heavily booked especially by veteran safari travelers, visitors who had already been introduced to the safari world and knew what they liked and didn’t. So if you’re one of those, and capable of going within a month or two of an announced deal, keep that computer internet engine fired up!