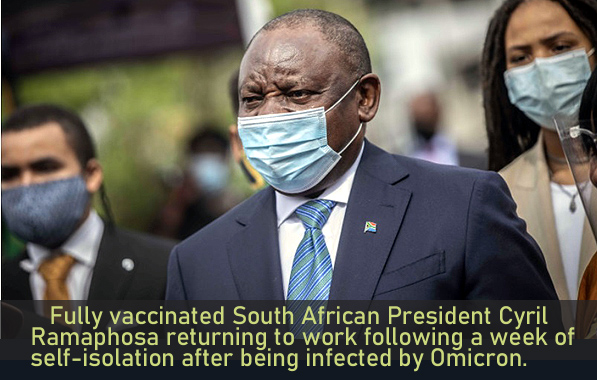 Being cautious about this does not mean I don’t believe the reports. I do. This morning DMC News’ excellent summary highlighting South African scientists’ excellent field studies absolutely shows me that Omicron might be insignificant in South Africa in as few as a couple months. Why, then, the caution?

(The NYTimes reported last week that a “reporting glitch” misrepresented the variant’s decline; this has proved untrue in the data to be reported since then.)

My caution is with anxious travelers ready to bolt out of their second floor window without (first) getting into the weeds of the reports and (second) recognizing that South Africa was really where it all started.

When it’s over in South Africa it might just be surging in Chicago and Schiphol might be closed.

Where I live in northern Illinois we’re just beginning to see the uptick in Omicron. The surge is probably a month away. The surge in Gauteng, South Africa began in mid-November. If Omicron fizzles out in Gauteng by the end of February, the statistical projection for Illinois is that it fizzles here in April.

Europe is about a month ahead of the U.S.

South Africa is a very different place from Illinois or Schiphol or along the Danube. To begin with South Africa’s population is significantly younger. It’s presumed that many South Africans have already suffered and recovered from Covid-19. How this large percentage of the population carrying natural antigens effects Omicron’s trajectory is unknown.

South Africa is significantly different to Kenya, although not as much so as different to the United States. The population in Kenya is also younger and like South Africa it’s presumed that a large percentage of all the populations of sub-Saharan Africa have already been infected with Covid-19 and either died or recovered.

But it’s unclear yet if Omicron has manifest itself significantly in equatorial Africa. While that may seem odd given how much closer Kenya is to South Africa than the United States, the truth is that there is more travel between South Africa and the U.S. and Europe than with Kenya. That could debunk any mystery.

As I’ve said multiple times, the risk to a fully vaccinated traveler through distant countries with surging infections is not that they might become seriously ill. Rather, it’s three other obstacles:

(1) Becoming mildly ill. Not fun on any trip. Besides, if you contract Omicron no matter how mild your infection you’re supposed to quarantine.

(2) The potential exclusion to the traveler of all emergency health responses in that distant land, and when traveling to it. The traveling population from the United States to distant lands has becoming older and older in the last few decades. This population is more at risk for the need for doctor’s attentions and even short hospitalizations while traveling. During an infection surge these services might not be available.

Europe recently had knee-jerk reactions to the increased positivity rates in their countries. Britain until just last week closed is borders slam tight against most travelers from sub-Saharan Africa. Last week the Netherlands announced rigid measures that while not yet effecting transiting passengers could very well do so very soon.

In sub-Saharan Africa Rwanda announced last week that foreigners visiting the country had to quarantine for 72 hours. This was reduced the next day to 24 hours for tourists, but it reveals a lack of policy consistency that may presage worst measures yet to come.

From a wider perspective, countries like Morocco have shut their borders completely.

Traveling while Omicron is surging in the path or at the destination of your trip is simply not wise.

This, too, shall pass. Of course I was fabulously happy having returned from Tanzania in November. I went there before Omicron was known. I returned when Omicron started taking over the world. Is there any lesson to be learned from that?

Yes, in fact, there is. Go when you can. Don’t when you shouldn’t.