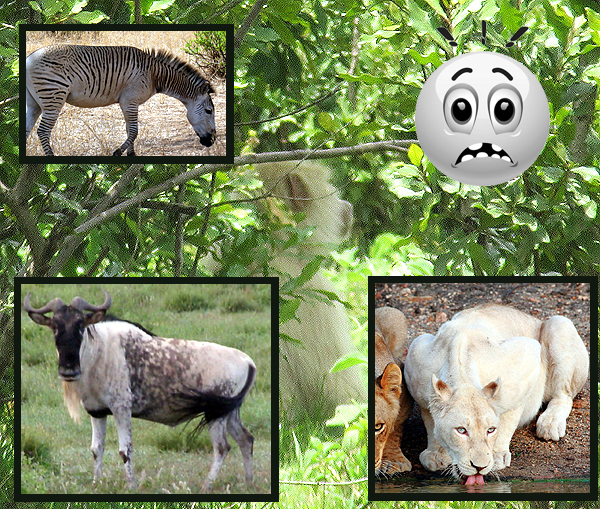 A video going viral was given leave to emerge into the public consciousness because of the news gap between Irma dissipating and Trump beginning to, again. It was of two stately white reticulated giraffe found in an unusual forest in Kenya.

The excitement provoked a massive use of smiley emoji not used so often, anymore. How ironic this isn’t really good news. So sorry, folks, white animals aren’t unusual. And it’s anything but good news.

This brings up a lot of questions. In my hyperstimulated reactive state caused not by my local county clerk but another politician, I could provocatively wonder why there’s so much press about white animals and not the equally unusual black ones.

But I won’t linger on the equally unusual and physiologically parallel animals known as melanistic. I’ll just be provocative about white.

The giraffe – and many other animals today in the wild – have a genetic condition known as leucism, and just as the field scientists reported in this case, leucism is happening more and more.

The white lions of Timbavati were the first stars of leucism reported 30 years ago and for quite a long time seemed to be the only such animals. But in the last few years, now, I’ve seen this condition in several different animals including those shown in the picture above (all my own Cannon SureShot pixes).

In fact, when I thought I saw an albino baboon, I took a photo (click here – with my Cannon SureShot) then immediately posted an OnSafari blog from the wild in March, 2017. I’d been too hasty. In reviewing better pictures my clients sent me when I got home, I realized it wasn’t an albino but leucistic.

Leucism is caused by a mutated gene which then sinks recessively into the animals genome. So the whiteness often disappears in the next number of generations before reappearing, again. The fact that it is more and more noticeable is an indication that there are more and more mutated genes.

What causes these mutations is not comforting. Mercury and PCBs are the main cause, but radiation can do it, too. The first generation of dolphins born in the wild near Japan after its Fukushima nuclear disaster resulted in a high incidence of leucistic dolphins.

The fact that we are seeing more and more of these is an indication that there is more and more toxic mercury, PCBs and perhaps, radiation penetrating even the most remote ecosystems.

Interestingly, lack of color – whether albinism or leucism – is a real disadvantage to wild animals. Albinism is worse, indicating a host of other physiological disorders spanning the whole gamut from diminished pulmonary function to brain disorders.

Moreover, beyond the physiological whiteness in wildlife is not good. Many field scientists believe that when a leucistic or albino baby is born the mother abandons it. Whiteness is a target attraction: it’s much easier for predators to discover.

In all three cases I remember of white animals in the last few years, the white animal seemed somewhat shunned by the others. Of course this is strictly anecdotal. We were with them for less than fifteen minutes. But I remember in particular the white wildebeest in the midst of the great migration.

We were attracted to a “hole” in the mass of animals migrating in the distance. This often means lion, so we hastened over there only to see instead of a lion, a white wildebeest which was truly being given extra space by its kin.

An extremely interesting fact about the Fukushima leucistic dolphins is that they’re now seen regularly with true albino dolphins. It’s not clear, of course, which group sought out the other, but it is clear that the leucistic dolphins give certain protection to the albinos. They’re likely stronger and more alert.

So thank you all for all your many emails capped with a smiling emoji. Wrong one.