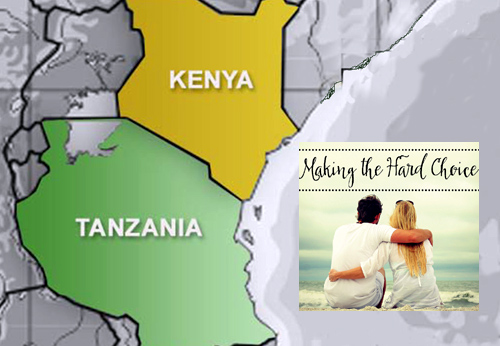 My five months in Africa ended this week. If you’re trying to decide between visiting Tanzania or Kenya, I’ve got the answer.

My answer, if you’ve got the cash and time, is both. But if you’re watching your vacation dollars and have limited time, the answer is Kenya.

First of all why does it take more time and money to visit both countries? The two countries share almost a 500 mile-long border with quite a few border posts, and much of the border actually goes right through abundant game controlled areas.

This isn’t just an issue of the additional costs of visas or shots.

The answer is because the two countries have intentionally made it difficult for tourists to visit them both on the same trip. Both countries believe if they force you into an all-or-nothing situation, they’ll be better off.

Since 1979 the border posts that fall in game controlled areas have been closed to tourist traffic. So, for example, the most important one, the border between Kenya’s Maasai Mara and Tanzania’s Serengeti, isn’t just closed, it’s now grown over with jungle.

The Sand River bridge which used to deliver tourists between the two countries is ready to collapse. I wouldn’t use if I could. (Click here for my blog that explains why this happened in 1979 and has never changed since.)

So to travel from one game park in one country to another game park in the other country, you have to go back to a border post which allows tourist crossings, and this usually means traveling backwards a lot.

The cost, for example, to travel from a camp on the southern bank of the Sand River in Tanzania, to one you can see across that same river in Kenya, is about $600 per person and at least 8 hours if you fly the whole way.

It will take at least the entire day, and that often doesn’t make sense, because if you try to do it in a day, you’ll have to leave at the break of dawn and won’t arrive in the other country until late in the afternoon/early evening, yet you’ll be paying full game viewing fees (twice!) for each country on a day that you won’t have any time to do game viewing!

So die-hards wanting to see both countries recognize that it’s better to do something else in between, breaking up the long circuitous journey, if that’s nothing more than just seeing a city like Nairobi. And that’s where the concept of needing more time starts.

And then you get into the problem of having to whittle away principal attractions in each of the countries to make enough time to see them both, or if accepting only the very prime attractions in each country, you’re looking at a safari of more than two weeks.

Add to this that “open-jawing” your international air fare (flying into one country but returning from another) is considerably more expensive than simply roundtripping one.

As a general rule, you’ll need 20-25% more time and money for the same amount of sightseeing and game viewing if you visit both countries instead of only one.

Both Kenya and Tanzania have a superb list of incredible attractions, game viewing and otherwise. If they opened their borders a tourist could approach them both as a single country, East Africa.

But they haven’t, and they won’t in my opinion. So I’m beginning to think that most travelers conscious of their travel budget and holiday time ought to choose one or the other and might do so realizing they’ll return another year to see the other one!

The same strategy that most Americans apply now to Europe’s many diverse nations ought to be applied to East Africa.

So if you’re contemplating a “first time safari” for next year – which country should it be?

1. Kenya is growing more stable than Tanzania.
Safety, and even more importantly, the perception of safety is probably the single-most important factor when people choose an exotic destination to visit.

2. Travel is cheaper and easier to Kenya than Tanzania.
Nairobi’s new airport is astoundingly modern and efficient. You’ll think you’re in Europe. Tanzania’s two airports, Kilimanjaro and Dar-es-Salaam, are losing not only service from Europe and beyond, but they’re losing electricity!

In my many visits in the last five months to Kilimanjaro airport, there were no less than a dozen power outages as I waited for my clients to arrive!

There is much more service to choose from flying into Kenya than Tanzania, and it looks now like Delta will be flying directly to Nairobi starting early next year.

3. Tanzania’s October election could be troublesome.
On the negative side and as I’ve written several times in the last few weeks, Tanzanian politics are heating up. It could be very good for the country, and there are many reasons to think that Tanzania will not go through the troublesome period of political change that Kenya did about ten years ago.

But there are also many reasons to think otherwise. A very contentious national election is scheduled for October 24, and I worry that the main candidates in both factions are talking less about the issues than “keeping the election peaceful.”

Even China — normally an aggressive side liner that never interferes with foreign elections – cautioned Tanzanians Wednesday about violence in the October elections.

4. Kenya is more aggressively conservationist than Tanzania.
Then there are gnawing conservation issues becoming toxic in Tanzania, beginning with the lax enforcement of ivory poaching, the relocation of Maasai just outside the northeastern Serengeti to increase a private Arab hunting reserve, and totally rebuffing conservationists’ attempts to slow down the planned dam and mine in The Selous.

None of these is serious enough for you to cancel a Tanzanian safari, but Kenya in contrast has high positive points on all of these named measures, and so if having to choose one over the other, I think it’s now a slam dunk.

Remember who’s writing this. The Serengeti remains my favorite place in the world, and that’s in Tanzania. My great migration experience these last 8 months in both countries convinces me it’s best in Tanzania.

But the time … money … and safety perception components of creating a great safari are now all tilting towards Kenya.