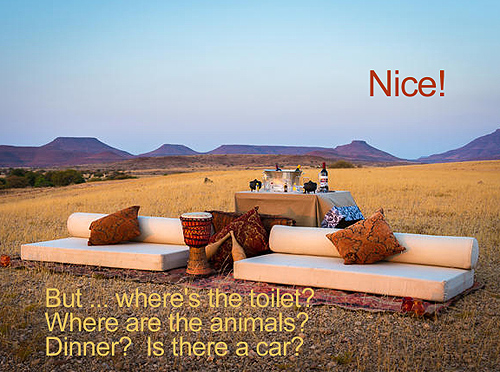 The Tanzanian government and safari companies appear to have embarked on suicide missions as they react to Brexit. Consumers beware : African companies raising prices in today’s climate are probably already deeply in debt.

The bottom is falling out of the Tanzanian safari market because the largest single component is the UK traveler. UK travelers are reacting to Brexit like Americans did to 9-11.

According to the British financial website, This is Money, more than 1 in 3 Brits now plans to cut back on planned holidays.

Brits book travel not quite as far in the future as Americans. Americans tend to do so about a year in advance. With Brits it’s about six months. This means that the very important end-of-year holiday season could be a disaster for Tanzania.

This follows several bad years because of ebola, terrorism, the persistent European recession and in the case of South Africa, the plummeting Rand.

One of the most horrible practices of any small business is to live on cash flow, and that’s legend among travel companies in particular. Now in Tanzania, those who have done so may be on the way out.

If you’re a consumer considering traveling to sub-Saharan Africa and Tanzania in particular, I really suggest you beware.

Hardly two days after Brexit, the panic began when the government of Tanzania decided to slap an 18% tax on many tourist products that had not previously carried it, such as transport and guided sightseeing. In Tanzania’s fairy world land, certain government officials claimed they were even slapping the V.A.T. tax on themselves, onto existing taxes!

However the math might eventually be done, government fees are rising and in some cases substantially. The cost for a vehicle headed into Ngorongoro Crater, for example, jumps 25% Friday.

V.A.T. is the value-added-tax of 18% theoretically applied across the board to anything sold in Tanzania. For many years, though, many tourist services have been exempt, an incentive of the sort many governments in the U.S. afford businesses for locating in their town.

Tanzania’s President, John Magufuli, has been crusading ever since being elected last year in a dark-horse contest, slipping incognito into ministries and firing sluggards on the spot. He reduced income taxes earlier this year for the “common man.”

He’s now trying to right the budget, which since time immemorial hasn’t really been one, rather just a siphon of foreign aid. It’s unclear that the huge V.A.T. announcement on tourism was entirely the result of Brexit, but clearly the rush to impose it – even unprecedented in Tanzania – suggests so.

Laudable as Magufuli’s efforts might be, it will have definite negative effects on Tanzanian tourism.

Healthy companies, I think, saw this coming. Particularly the old strongholds, the midmarket chain lodges like Sopa and Serena, have held prices steady or decreased them, trimmed staff without a noticeable trim in service, and moved towards dynamic website pricing.

Unhealthy companies, particularly some of the upmarket ones like Asilia, are doing just the reverse. In fact, they are using the current situation to raise prices higher than to just cover tax increases.

The upmarket could be the most effected under the current situation. Upmarket trends have been moderating or declining recently, stressing the health of those companies.

Three of Asilia’s main competitors in Tanzania, Nomads, Sanctuary Retreats and &Beyond, have either announced no increases or agreed to guarantee current rates on existing reservations for which deposits have been paid. Wannabe upmarketer, Elewana, has even announced new specials that essentially lowers its prices.

This will not be a fun year for a safari company working in Tanzania. But tricking the consumer goes too far. Consumers should exercise exceptional due diligence before planning to sip a gin and tonic on the veld at sunset.