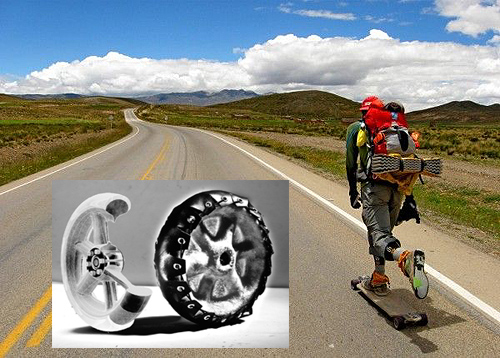 Africa is fraught with innovation and in Ethiopia kids have reinvented the wheel!

Development is happening so fast, today, in Africa that the end points and beginning points are stretching further and further apart.

The dynamic is as true of wealth and poverty as it is of physical things … like cars and bikes.

Ethiopia and its capital, Addis Ababa in particular, are hyper examples. More millionaires were produced in Ethiopia in 2013 than any other African country.

And as you would expect, that meant many more modern consumer goods were sold like refrigerators, TVs, cell phones and computers. But most of all, cars. And the government is facilitating the transport boom by rapidly completing many new, modern roads and highways.

But unlike the developed west, a car is not something even the most wealthy Ethiopian kid is likely to get.

Bicycles have been around for generations, but even those are being whisked up by adults who need certain transport to work. What’s left?

Skate boards. But believe it or not, imported skate boards are more expensive than bicycles, even though there’s plenty of most of the basic materials available in Ethiopia to build them. Except tires. There’s no rubber in Ethiopia.

So as reported this month in Afrigadget.com, an Ethiopian student has designed a durable skate board wheel made from discarded old wheel rubber that is stitched around a base that can be manufactured locally from metal, fiberglass and foam.

The “gadget” is part of the creative production of IceAddis, one of several NGO offshoots of a collaboration of western companies led mostly by Scandanavian countries.

So skateboarding has come to Ethiopia! Thanks to local innovation and, by the way, the universal desire of kids to have fun while sailing through the air!