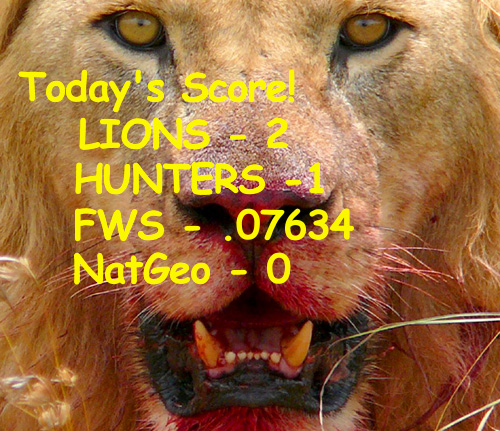 The ongoing battle to “list lions” as an endangered species is heating up: notably NatGeo in an embarrassing flip-flop and FWS cowering in the shadows.

A year ago the conservation world was rattled when America’s Fish and Wildlife Service (FWS) agreed to consider whether the African lion should be placed on America’s Endangered Species List.

It would be a revolutionary approach to dealing with the decline in lions documented in Africa over the last decade.

Revolutionary, because whatever African animal goes on America’s Endangered Species List means that CITES will definitely consider interdicting it globally as well. And among all the other ramifications, hunters would no longer be able to bring their lion trophy home, and in some cases, not even hunt them.

What is a Big Game Hunter without a Lion?
In my opinion, a Bully without a Victim.

So you can imagine what a storm that decision last year caused. Hunter organizations around the world descended on the FWS like the NRA descended on Congresspeople trying to do something about the Sandy Hook massacre.

I guess it doesn’t look good for lions.

Meanwhile, more and more studies are coming out trying to explain the continuing decline. I’ve written about the human/lion conflicts in increasingly urbanized Africa, about increased poisoning by farmers, and even a brilliant scientist’s study that found a virus in buffalo that lions kill to eat was migrating into lions and killing them.

One of the newest and most intriguing studies is that global warming in particular is hitting the population hard.

I imagine it’s a combination of all the above. And when a species decline is attributed to so many separate factors, it doesn’t look good. You can work on one of the problems, then another, and find in the process that the solution to one is exacerbating the other.

Whether or not hunters should be allowed to shoot lion and hang their trophy above their fireplace is, in fact, rather incidental to the problem of saving them. Relatively speaking there are so few lions shot each year compared to those dying of all the other dreaded reasons, it’s fair to recognize this as a distraction.

On the other hand, it is a moral debate that won’t go away.

When a species is in decline, do you allow a recreation that hastens it, however incrementally?

I was appalled last year when National Geographic said YES.

NatGeo has truly morphed from what it originally was. Anyone who flips to their cable television shows about Arizona cops or reality TV understands they’ve moved from caring to counting.

And that backlash that editorial referenced above caused was enormous. So today, guess what? They’ve flipped:

“Why Are We Still Hunting Lions?” a NatGeo editorial of July 31 asks, advocating an end to hunting lion and a listing by FWS.

Well, they could answer themselves with their editorial last year, but I doubt they will.

Here’s a more credible answer: The International Fund for Animal Welfare has just completed an exhaustive study that concludes that the big game hunting of lions contributes meaninglessly if at all to any form of conservation.

The report also shows that the big game hunting industry is actually supported more by hunting species like buffalo than lion, and that any obstacle for hunting lions that would result from FWS or CITES listing lion would be insignificant.

So you have your answer. It’s morally wrong to hunt an animal in decline and economically insignificant to stop hunting them.

So NatGeo, what do you say about this … now … this time?