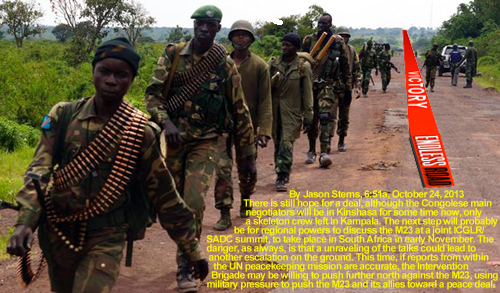 Under the noise of Snowden, dysfunction of Congress, frantic media and lackluster personality of Obama, the War Against Terrorism is being massively ratcheted up in Africa.

The French Foreign Legion was dispatched last week to the remote deserts of Mali, to support a freely elected government that is being newly challenged by rebel groups in its most outlying cities.

Crack South African troops added to increased United Nations peacekeeping forces and ruthless Congolese government troops newly armed by the west, have been crushing the last of the known rebel groups in the eastern Congo, an area of conflict for nearly a half century.

Hard. The unspoken but terribly obvious Hollande/Obama alliance to make Africa the last great military battleground against organized terrorism began five years ago in Somalia. American advisers were everywhere in northern Kenya and the port of Mombasa, and French warships were just off the coast of Somalia.

Drones were added and the war begun. Kenya was enlisted as the visible front army and Somalia was “liberated.” Its al-Qaeda affiliates were scattered and what was left of anything organized raced through Uganda into the center of the continent.

The world watched 90 U.S. soldiers chase them across the Uganda.

But Hollande and Obama miscalculated the arsenal of weapons that liberated Libya would make available, and scattered groups in Mali benefited enormously. France’s end-game mission to America’s chasing of the rebels into the center of the continent was to crush them in the Central African Republic (CAR).

But instead, it had to focus on Mali, far northwest of the CAR. So today the CAR is essentially anarchistic. A report published this morning by Amnesty International describes the CAR in the most horrific, barbaric terms. Every civilized person seems to have abandoned the country, making it ripe for organized terrorist control.

Hardly two years ago the focus of visible battles between the west and its proxies, and al-Qaeda and its proxies was in Somalia. Only a few months ago it reemerged in Mali where it persists. And the riffraff, disparate, heavily armed leftovers of a dozen so-called al-Qaeda affiliates or older rebel groups (like the LRA) are now duking it out like barbarians in the CAR.

You cannot eliminate unless you had global gun control the likes of which evades my most fanciful dreams. Where there are weapons and the materials for making them, there will be terrorism.

The question is, Are We Safer Now?

Before I give you my opinion, don’t you think it’s important to also ask, Is Africa Safer Now? What right does the west presume in order to use Africa as the backforty into which the wolves are chased and kept at bay?

If the world ever runs out of weapons, we’ll be forced to deal with conflicting ideologies, as well as crazy terrorists, in ways we should develop, now.

Modern force is so omnipresent, as easily mastered by an internet keyboard, that it can’t possibly end conflict, today. It will only interrupt or delay it.

Consider this, first. The conflict in the DRC’s Kivu Province is a half century old. It’s based largely on the same ethnic divisions that caused the Rwandan genocide. Those divisions are festering. The calm in Rwanda is the calm of a benevolent strongman. Once his biceps snap, all hell is going to break loose.

Consider this, second. Organized terrorism is fanatical. Unlike ethnic conflict, terrorism may have no other explanation except the obsession to rule and control.

Both turn men into beasts eager to die – to kill themselves – for reasons they don’t wholly understand. Hypnotic or simply psychotic.

You can’t get them all. We don’t need any more generals. We need shrinks.