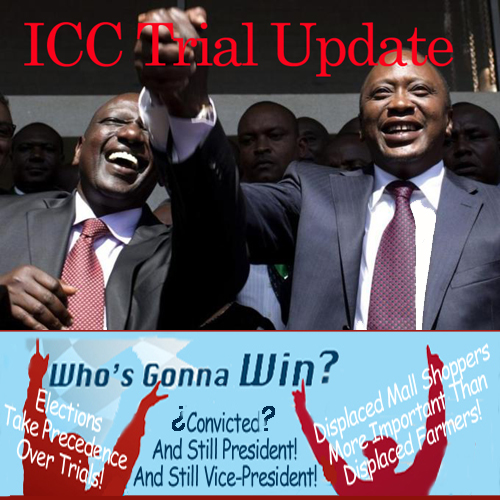 While the trial of Kenya’s Vice President in The Hague continues it’s increasingly difficult to believe that Kenya’s President will actually show up for his trial on November 9.

The future of the International Criminal Court hangs in the balance, and it’s a bum wrap for a good global institution based on noble ideas.

But western powers are lobbying that the trial of Uhuru Kenyatta, Kenya’s President, either be postponed or that Kenyatta be excused from the proceedings in The Hague, because of the national crisis that followed the Westgate Mall attack.

Pressure particularly from the U.S. seems to be winning the day, and if Kenyatta does attend, it may be only briefly for the opening session. The world’s obsession with security trumps everything, and it seems this simple equation is that “crimes against humanity” are less important or severe than terrorism.

Over the weekend a BBC analyst put it this way:

“Many experts in international law believe that his case reflects the apparently incompatible demands of historical restorative justice versus future global security.”

Those of us who believe – and there are many if not a vast majority of Kenyans – that Kenyatta and Ruto are, in fact, guilty as accused, are not getting much support from the ongoing process of the ICC.

The trial hasn’t gone well for the prosecution. Many witnesses have been dropped, and of the first half dozen on the stand, there were flip-flops and easily rebutted innuendos.

It just hasn’t seemed a very tight prosecution. Moreover, so far all the evidence has been circumstantial. Ruto has been implicated in lots of hocus pocos similar to Free Masonry or other quasi secret organizations. He’s been implicated in funding groups of known thugs and referenced as giving a pass or nodding to illegal actions.

But no witness has accused him of killing anyone or of specifically telling anyone else to kill anyone.

The reason so many mobsters in the U.S. ultimately went to jail was for tax evasion, a strange wrap for murder. But it’s unlikely that the Capones, Genoveses or Salermos would ever have been convicted of crimes against humanity.

The fact of the matter is that Uhuru Kenyatta has probably less blood on his hands than Dick Cheney, or a bunch of top American politicians long since dead and forgotten.

The World Court is a magnificent idea. And the handful of people it has so far tried and jailed include some of the worst monsters in modern history. But none of them were nationally elected to lead the countries they were accused of previously destroying.

I’m convinced that Ruto and Kenyatta are culpable of the crimes they’re accused of. But The Court has so far not presented an air-tight case, the west (not much less Kenya itself) is now newly worried about terrorism in Kenya, and I’m just not sure that the people of Kenya would not rather have these two men as leaders than jailed criminals.

I’m not saying the country has forgiven them, because it’s still deeply split tribally and socially. But where Kenyans do seem to have come together is that the election process should be considered paramount, even more important than the judicial process.

Kenyatta and Ruto were fairly elected although the contest was phenomenally close. But the country truly seems, from all sides of the aisle, to be rallying around that concept that the election was fair.

And if criminals have been duly elected, they should duly rule. And no one presumes this can be done from a jail.

It’s been true of not but a few of our own top politicians.

BACKGROUND
Kenyatta, Kenya’s president, and its VP William Ruto, have been charged with crimes against humanity by the World Court in The Hague. Ruto’s trial is ongoing. Kenyatta’s is scheduled to begin in two weeks.

Before they won Kenya’s presidential election last March, they were powerful men within political parties that were closely linked to various tribes. When Kenyatta’s party lost the election to Ruto’s party in 2007, horrible violence broke out throughout Kenya.

About 1300 people were killed, some brutally, and anywhere from 180-250,000 people displaced. Many of these displaced persons remain in state-run camps, today.

The peace treaty brokered by the U.S., the U.K. and Kofi Annan worked magnificently and included a provision that the perpetrators of the violence be named and tried.

The Kenyan Parliament, unable to agree on a process for trials, asked the World Court in The Hague to undertake the trials, which is now happening.

Meanwhile, the two arch enemies formed a political alliance and won the election.