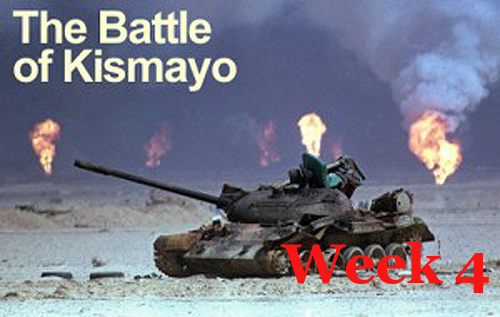 The Kenyans never said how long it would take, but it’s taking too long. And while opinion in Nairobi remains ludicrously supportive analysts outside the country are painting a gloomier and gloomier picture. The Kenyan invasion might have given a terrorist organization its first opportunity to win a conventional war.

There was little fighting last week. The military commander explained that they were giving civilians time to get themselves out of harm’s way, and pacifying the areas they now control, but analysis suggests otherwise. The heaviest rains have ended, but the roads remain a muddy mess, not easy for military equipment to travel.

Moreover, the Kenyans may have decided that a wave of diplomacy launched by Kenya’s Prime Minister simultaneously pleading for more western help while starting a second if diplomatic war with Eritrea needs some time to develop. The Kenyans accuse Eritrea of supplying weapons to al-Shabaab.

The 2-3,000 Kenyan soldiers (we haven’t been given a firm count yet) are equipped with 1980s military equipment, mostly HumVees and old mini-tanks called “technicals.” The New York Times’ >>> estimates al-Shabaab fighters in Somali at 25-30,000. So that’s ten times the Kenyan forces.

But there are also 8,000 African Union troops supporting the tiny Somali Transitional Counsel’s military, so the true numbers might be around 10,000 invaders to 30,000 locals.

The invaders, though, have the assistance of America and France. America has been very infrequently but significantly sending out drone missile attacks to areas in and around Kismayo. The French Navy has twice bombarded the port. So with this additional support the Kenyans position is probably better than it looks by the numbers.

Reports of al-Shabaab softening its pitches among the local population and kindly asking elders of various clans to allow their sons to join “the resistance,” as well as finally allowing outside aid organizations to distribute food, is an indication al-Shabaab believes it still has influence if not total power.

Or that they are legitimately worried. The Kenyans only real advance last week was from the south, its second front. There a smaller contingent, followed by two miserable Kenyan Navy boats offshore, pushed militants out of southern towns to about 100 km south of Kismayo.

As a result the Kenyans claim to have stopped piracy, indeed all shipping, into and out of Kismayo. (Undoubtedly with the help of rather larger French naval vessels nearby).

But the main force that entered from the west almost 4 weeks ago is stalled. Afmadow 30 km to the north of this main force is where al-Shabaab is concentrating fighters, and Kismayo, 80 km to the southeast remains the objective.

As I said last week, al-Shabaab’s brilliant military move to consolidate Afmadow means the Kenyans could fall victim to a pincer action is they continued onto to Kismayo. This is the real reason they’re stopped. Roads are bad, equipment is old, and they may be overall better outfitted than al-Shabaab, but al-Shabaab currently is winning the war of strategy and has already won the war of numbers.

There’s a lesson it’s taken America a dozen wars in my life time to learn: you can’t win without the locals.