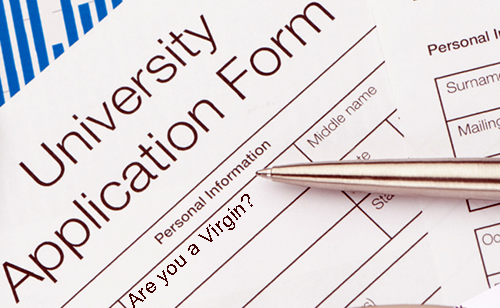 A South African mayor has reserved part of her town’s college scholarships for virgins.

Concerned with the high rate of Aids and unwanted pregnancies, Mayor Dudu Mazibuko told the BBC that 16 of the town’s 113 college scholarships would go to girls cleared as virgins.

The certification is performed by an elder woman as part of an annual ceremony of homage to the Zulu king. Special intermittent testing would then continue – much like drug testing for sports – and whenever a woman fails the test the “Maiden’s Bursary Award” is terminated.

“Unsurprisingly, this has been met with much controversy,” writes teen reporter Casey Lewis for Conde Nast. Lewis further notes that a college-age virgin is “very, very problematic.”

“Virginity testing is an invasive, flawed, traumatising and sexist practice, that has no bearing on whether or not women should be granted bursaries,” an on-line petition organized by South African university students contends.

The petition points out that the policy doesn’t address the role that young men play in unwanted pregnancies resulting in an “unequal” approach to young women.

With less than a couple thousand signatures so far, the now week-old petition is not doing well by South African standards. Despite the resolute equality provisions of the young South African constitution – which among other progressive components mandates that a certain proportion of publicly elected officials be women – sexism remains strong in the country.

KwaZulu Natal where Mayor Mazibuko’s town is, is a particularly conservative region. In fact towards the end of the anti-apartheid struggle in the late 1980s the region broke away from the growing black power movement to support the white-led apartheid regime.

The fact that the policy was promulgated by an elected woman mayor illustrates a global phenomenon of conservatism beautifully discussed this month in Foreign Affairs’ look into “inequality.”

Michigan professor Ronald Inglehart links the decline of economic equality to “cultural issues [that] pushed many in the working class to the right.”

During a fall meeting with Pullman High Schoolers regarding a proposed bill in the Washington state legislature increasing access to birth control, the very conservative Olympia woman state representative Mary Dye shocked students by insisting the conversation be governed by whether or not they were virgins.

Education and women’s health are global as much as local issues. Economic declines are often surprising, or at least at the start seem uncontrollable at that moment. As Ingelhart implies the anger manifest in those hurt most by an economic decline is often expressed in support for cultural positions and personal values that are clearer to evince than policies for economic recovery.

South Africa has an inequality ratio considerably higher than the U.S.’ already staggering high one. The reasons for this include global factors and are certainly complex.

Mayor Mazibuko’s continued support is not unlike Donald Trump’s.