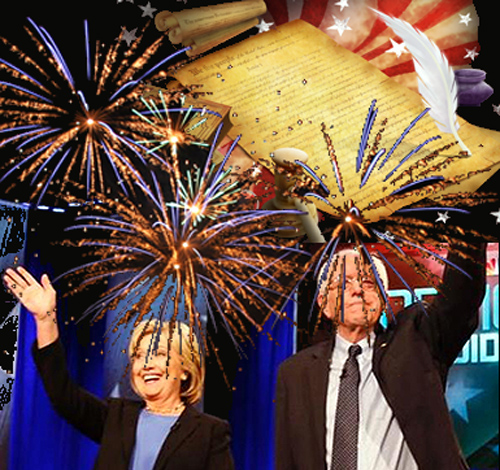 Letter to my African Friends:

Last night I watched the first official tallies of this presidential election. I realized that meaningful social change using democracy is something possible in Africa but not very likely in America.

America’s constitution will soon be 250 years old. Unlike Europe where constitutions were changed often radically many times, most Americans believe that our aged constitution remains the best plan for running a society.

That’s because most Americans are afraid of change.

In my short lifetime unexpected hurt has beset us Americans, social pain not experienced since our Civil War almost 150 years ago. Because for most of our 250 years American society was healthier, freer and happier than almost all the rest of the world, most Americans think our current hurt is temporary and unusual, and that we should just “keep on trucking” and ultimately things will get better.

Meanwhile with each passing year our constitution ossifies even more. Every constitution tries to perpetuate itself, and we let ours get away with murder.

Here’s what I want to tell you as you fashion your new societies with democracy:

1) Executive presidencies like America’s are bad. Too much attention becomes focused on a single person. Parliamentary democracies like Europe have a much longer and more prosperous future.

2) Don’t tinker with the media. We did. We allowed oligarchy business crazies like Rupert Murdoch to buy then control our media. Our free and democratic society should have stopped him. He did too many illegal or almost illegal things to gain control, and then with time this control seemed organic, not ordered like it really was. The desperate needs of one man started to grow through the entire society.

3) Don’t be afraid to enforce the truth. This is a touchy subject, and the retort you’ll hear is that there are differing views on what’s true. That’s playing around with the language. Kutekeleza ukweli. Swahili is better for saying this. There is a truth, a reality, an ukweli. Climate change is halisi. Put them together and “ukweli na halisi” is incontrovertible truth, and we’ve lost it in America.

We allowed economic forces to deny reality. I suppose that doesn’t matter in some cases, and the argument is that the “right to say anything” is a part of free speech. But when those forces deny climate change, deny womens’ rights, deny voters’ rights, deny science, it gets rid of truth. That’s what’s happened in America.

I think this is because our system is so old it perforce doesn’t work as well as more modern systems of government, and while that isn’t ukweli na halisi it’s close. Our society is afraid of change, and so much so that it now freely allows denial of the truth.

Finally don’t think you’re without problems or that we Americans don’t have a lot to admire. We’re much less racist and ethnic than you are. Racism and ethnocentricity could very well be your Achilles Heal, just as fear of change is ours.

We are fiercely independent, and you aren’t. Many of you think of independence as courageous but pointless. We equate independence with freedom, and so should you.

Those of you reading this are likely part of the “emerging middle class.” You’re no longer herding goats or trucking Jerry cans from the river. Your society has managed to liberate you personally from many economic hardships.

Lots of your brothers and sisters aren’t where you are, yet. Don’t abandon them for your own stardom, as we so often do in America. Don’t embrace the false notion that “you pulled yourself up” so why can’t they?

There’s not a one of us that did anything alone.

Last night as I watched my hero, an old man rally his young supporters, I too felt like an old man, and that America was an old man’s home. Youth in America is a minority, suppressed and coopted. But in Africa youth is the majority!

Any energy I have left to change my own society comes only when I think of you and the changes that you can bring to our world.