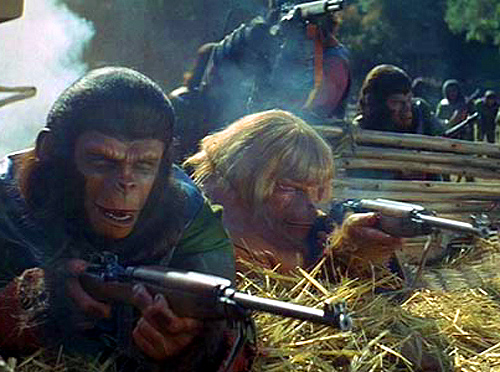 A recent study of chimps in Uganda is being misinterpreted to suggest human murder is natural, and sloppy scientists are reenforcing these beliefs.

Chimps have long been known to be murderers and cannibals. While dominance within many species is often violent and considered essential for the social organization of many species, it very rarely extends to murder and except for chimps, to cannibalism.

So scientists have been at odds for years trying to explain this behavior in chimpanzees. Research came to a head about five years ago when scientists carefully documented chimp gangs that persistently (sometimes over ten years) plotted against one another then celebrated territorial victories by eating their foe’s babies.

Anthropology Professor Jill Pruetz believed for many years that this chimp behavior was aberrant, that it would not occur naturally in the wild were it not for some unnatural interference. Most of the colleagues who agreed with her believed that “something else” was human interference.

It could be chimps mocking human behavior (many chimp studies occur near very violent parts of Africa) or humans stressing chimp’s habitat, but it seemed just impossible to ascribe murder and cannibalism to natural behavior.

Pruetz and most of the scientific community have relented based on a just published study in Nature.

The “study says chimpanzees kill their own as a survival strategy, not due to human contact,” summarizes science journalist Monte Morin in yesterday’s L.A. Times.

And as far as I can tell, virtually everyone agrees.

That’s fine. But what’s not fine and in my opinion absolutely horrible is to use this study as an explanation for human violence.

Arizona State professor Joan Silk wrote an opinion article in that same issue of Nature, which she titled, “The evolutionary roots of lethal conflict,” which says it all.

A closer look at Silk’s opinion may be more nuanced than the title, but her title is what was picked up and replayed time and again in the less refined media. Clearly she committed a grievous scientific error in not adding “in chimpanzees” to her title.

There is absolutely nothing scientific or even rational to presume that behavior in chimps explains behavior in humans.

In what I feel is yellow science Silk invited the comparisons.

“The origins and prevalence of human warfare may be echoed in the search for the answer to chimpanzee adaptation,” wrote one scientific blogger yesterday, and it’s a wholly rational conclusion from Silk’s title, whether she intended it or not.

And on and on.

Behavior changes infinitely more rapidly than DNA. To claim that today’s chimp’s murder-and-cannibalism as a survival tool means that our earliest common ancestor with chimps had that behavior, too, is ludicrous.

And even if the ECA did, it’s impossible to suggest that our behavior today is still manifest by it.

There is no question that war has been used as a survival tool by humankind. But this is not because it’s ingrained in our genes, which is how the current chimp study is being distorted.

Why human violence evolved is certainly an interesting question, but it’s not biological. And what’s even more troubling is how the uneducated reaction to this study devolves from societies to individuals, suggesting all individuals carry a kill instinct.

I am so upset by this race to justify murder and violence. It slips so easily into the contemporary narratives supporting police using excessive force, violence and abuse against the less powerful like spouses and children, and not least of all, the rush back to war.

These are very troubling times, and scientists need to be very careful today. Joan Silk was not.