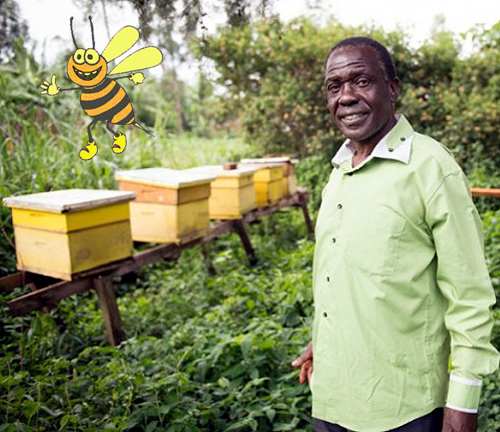 You might be afraid of the mythical African Killer Bee, but there’s a sweet buzz about them in East Africa!

With American and even Chinese honey production at low levels, the demand for honey worldwide has grown so substantially that honey is increasing in price 6% every year.

The 150 million pounds of honey Americans will produce is just not enough for the demand.

Honey production is down because of a terrible virus that while winding down still effects large swaths of wildflower America. This has a further disincentive for honey production as successful beekeepers shift from producing honey to selling their tools elsewhere.

What? A beekeeper in Harrisburg, PA, will triple his annual income if he packs up his hives and travels with them to southern California to pollinate almonds for three weeks.

East Africans are taking advantage of the demand in the market.

Honey Care is a for-profit East African corporation whose main mission nonetheless is to support distressed communities. (Did you register that BP? : a for-profit company with a mission greater and more noble than making profits.)

It does this by offering a startup package for $50 of two hives. And most of the time the newly endowed beekeeper doesn’t have to pay the $50 as Honey Care also comes with a loan from a microlending NGO.

Almost all startups are successful. The $50 investment the first year yields $175 annually by the second year.

The program has been so successful that it’s spawned a secondary industry of “professional hive tenders” who travel from small beekeeper to the next tending the hives, if the farmer herself doesn’t want to.

Honey Care then buys, packages and markets the honey. It’s also among the first companies worldwide to use the Swarm Phone App so that East Africans considering a purchase from a grocery store can scan the barcode to find out what kind of flowers produced that particular bottle’s honey.

Since Honey Care is expanding throughout East Africa, it’s become something of a grocery store game to scan this bottle then that one, discovering the first is from wild ginger and the next from purple clover and so forth.

A couple years ago the honey bee got a very bad rap which was mostly fraudulent first incorrectly reported by poor if racist Texas journalism.

That was followed almost as if predestined by a virus in the western hemisphere which has wiped out so much of the organism that the honey producers are now referring to the “new normal” in production at about half pre-virus levels.

That raised prices, and that gives the small land holder in Africa a truly golden opportunity!