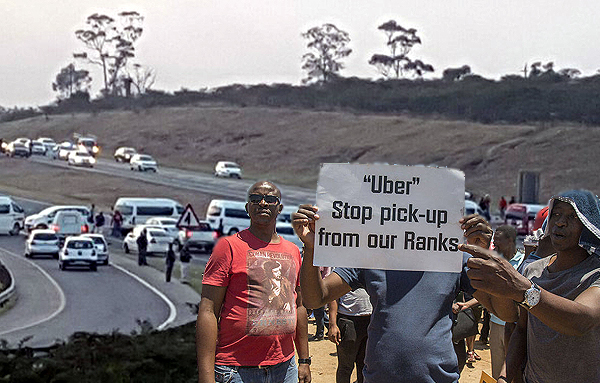 The best taxi service is still Uber… in Nairobi, Joburg, Cape Town, Lagos, Kampala, Cairo, Dar… but … not in London or Amsterdam. Uber lost its license in London and its customers in Amsterdam.

The Uber controversy is fascinating, and a perfect example of what’s to come in a better world. (You’ll be surprised what I mean.)

For the second time since September South Africa’s federal capital of Pretoria was shut down yesterday by traditional taxi cab drivers protesting Uber. This is a tit-for-tat war going in South Africa. Traditional drivers burn an Uber car, then Uber drivers burn a taxi. It’s been going on like this for several months.

In Nairobi for the last few months, there’s been another kind of Uber war going on: Uber vs. Uber.

Technically the big Uber computer in the sky controls the world’s requests for transport, and dispatches individual drivers. But Uber also requires a certain minimum standard for a vehicle. For a while Uber offered potential Kenyan drivers the down-payment ($500) for a good car.

But savvy folk saw Uber as a great investment, particularly in Nairobi where cabs are notoriously slow and broken down. Buy a few good cars, then subcontract them to people who can drive who don’t have the capital to buy their own vehicle.

The result was numerous Uber pods, small companies with multiple vehicles leased out to drivers who weren’t rich enough to get their own cars. In May some of these drivers noticed that their work list fluctuated widely, whereas the owner of their pod seemed to be working constantly! Owners control the Uber technology, then in a second array of mobilization call their subcontracted drivers.

They plucked the best fruit from the tree! Subcontracted Uber drivers staged a protest!

This kind of mayhem in the taxi industry doesn’t yet seem to effect the lives of those of us who use Uber. At least on days without a protest, it works better, faster and cheaper than traditional taxi services.

But if Uber begins to fight Uber … what does this really mean?

I think the answer to this lies in the places where Uber or Lyft aren’t doing well.

The Netherlands has one of the best transport services of any country. There are so many public buses run so well that for the last few years bus drivers don’t even make people pay stepping onto them.

In April, 2015, Uber had become well established in Amsterdam. A formal investigation was launched which has resulted in the city partnering with Uber!

As a result, Uber has become marginalized. It’s mostly just used now by foreigners entering the country with an Uber app, who are unfamiliar with the equally competitive other services available in the city.

What does this tell us?

That Uber is a flash-in-the-pan, a reaction to capitalism that won’t bend with the times. As soon as other cities in the world like Amsterdam find the wherewithal to sufficiently fund their public services, Uber will no longer be needed.