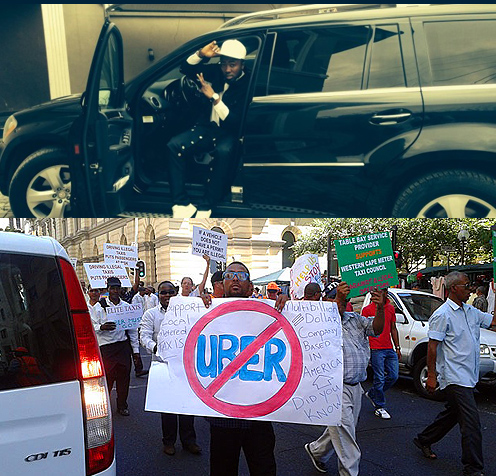 Uber is rolling over Africa despite growing protests in Cape Town and Nairobi.

In my opinion Uber’s genius is principally its app. I think if yellow cab or Marvin’s Machines in Keokee had had the foresight to move with the times, it would be Uber Over.

Uber, however, claims otherwise. It claims its genius lies in contracting with independent drivers who get their own licenses independently of any company, but the fact is there’s nothing new about this.

Limo drivers do essentially the same thing. Shuttle services, too. No, Uber’s genius is in its app.

Cab service throughout the world is one of the most uniform, corrupt and nepotistic services in the world. So essential and never sufficient, travelers stand in lines for ridiculously long times, get drenched waving their appendages into the rain and oncoming 18-wheelers and argue endlessly to keep their cab going on the shortest route.

The cabals that provide workers to the cab cartels across the world are a multi-layered no-contract service licensed by metropolitan cities whose nature of doing business is rarely transparent and never fair.

The only place in the world that I enjoy riding cabs is in London. Of course a cab ride from Heathrow to a hotel in Piccadilly costs almost as much as the flight to London. You get what you pay for.

Other than London? It’s one of the most stressful parts of a trip.

Enter uber. Nigerians love it. The response “has been overwhelming,” according to an Uber executive in Lagos.

Uber plowed over Nigeria. It launched with one of the country’s most famous hip-hop stars, Ice Prince, and then it devoured an earlier similar startup, EasyTaxi, by offering up to $12 to every person for the first ride. It moved from Lagos to Abuja faster than Boko Haram.

EasyTaxi just can’t compete. It doesn’t have the snazzy app or the tech behind it. That’s the wizardry of Uber.

Negotiations continue in Cape Town where over the weekend Uber claimed to have a licensing deal that was then denied today by a city official.

Uber Kenya launched recently in association with the very popular Restaurant Week in Nairobi, offering to give free or reduced rides to certain restaurants.

Resistance is severe in Kenya where living and working successfully means mastering a network of dependency.

The universal argument against Uber is that there is no systematic driver training or qualification. The widely cited Indian rape case is forever mentioned.

One wonders, though, how many rapes and other incidents of abuse routinely occur in regular cabs around the world.

Last month as a hostage situation developed in downtown Sydney, Uber jacked up its fares by 400% as terrified customers tried to leave the city center. (It has since offered refunds.)

Uber’s market-driven pricing rather than set pricing determined by expensive citizen commissions is one of the novelties attracting Africa’s new entrepreneurs. And they need cabs.

In Nigeria Uber usually costs more than EasyTaxi and many conventional cabs, but provides snazzy cars and well-dressed drivers that appeal to a huge segment of this trendy populace.

In South Africa and Kenya, as through much of the rest of the world, Uber costs the same or less.

Who’s making that decision? Uber will say “the market” but then, who’s got their statistical fingers on the market pulse?