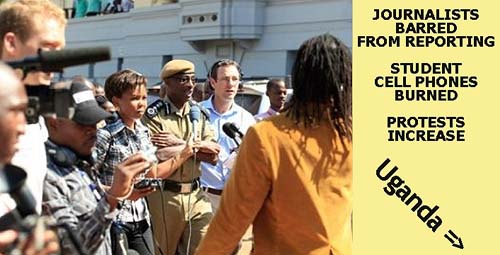 Absolutely nothing can stop Uganda’s slide into the pile of Zimbabwes except the President resigning. The country is mobilizing. The protests need help.

Stopgap measures by the government aren’t working; strikes, closures and demonstrations are increasing faster than I thought they would and my caution about tourists going there is heightened, now. Today school administrators throughout the country began to confiscate and destroy student cell phones, an important way for Ugandan protestors to organize. This will infuriate the population.

It was a very bad week for Uganda. Its currency continues to nosedive. A fight broke out between the technocratic central bank manager and the President. And worst of all, the popular Kizza Besigye who came in second in the presidential election last November was arrested, again, and now journalists have been barred from recording any of the legal proceedings – including his expected trial.

Besigye had just returned from the U.S. where he flew for specialized medical treatment following his brutal beating in Kampala several weeks ago. No sooner had he set foot in the country than he was arrested.

Wednesday, he appeared in court and was given stiff bail. Yesterday he returned to answer charges of illegal assembly and inciting violence, but dozens of journalists were barred from the court room and the judge indicated the entire trial will be held in camera.

Huge crowds then massed in downtown Kampala waiting for him to exit. When he did, the full force of the Ugandan police was brought to bear, including water canons and AK47s firing into the air. Besigye and many of his followers sought refuge in the Yowana Maria Mzee Catholic Church.

Meanwhile with tourism declining and food imports rising, the Ugandan economy is reaching a critical stage. Government bonds could not be sold this week for less than 13.5%, according to the Financial Times.

FT claims that now “donors including the World Bank, UK and Ireland have reduced or withheld direct support, which makes up 26 per cent of this year’s budget.”

America and other leaders in the democratic world must own up to their own mistakes in these countries, and the greatest one in Uganda was the free reign given the Family and its C Street American legislatures to represent us when in fact all they were doing was turning Uganda onto itself. Many of the legislative initiatives causing problems now in Uganda, including oppression of gays, criminalization of abortion and the reckless embracing of the “free market” were literally written by C Street legislative aids in the U.S.

And like here at home, the fiscal policies of conservatives do nothing but destroy. Note the inflation chart opposite.

My own blog last month about Uganda created enormous interest and many comments, but it appears clear to me that the tourism industry is now desperate, and my heart goes out to them. But it’s pointless to avoid the truth: Uganda is becoming increasingly hostile to its own citizens and ultimately, to its guests as well.

The 26th comment on that blog was from an executive in Uganda’s tourist industry who wrote almost as much as I did about the country’s many problems, and some I didn’t write about (like the decline in wildlife). But clearly, things are not going well. It takes this kind of courage from within the industry to help the country right itself.

There’s an important point for sounding and resounding the alarm. We’re in a new era, not the era that created the Zimbabwes and CARs. The peoples’ voice can be much more powerful than then, and clearly, the people of Uganda are demanding change that begins with the resignation of Yoweri Museveni.

The task, now, is for America to find constructive ways to assist the vanguard of protest. Twevolution has come to Uganda.