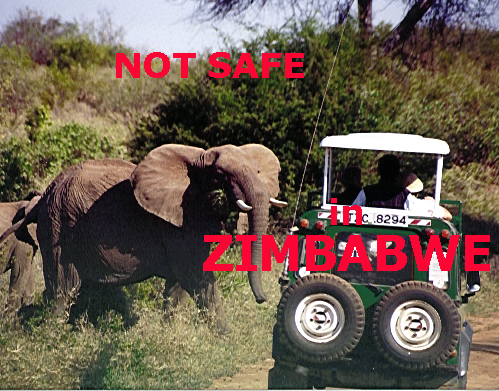 Last week a bull elephant killed an employee within a hundred meters of a popular Victoria Falls hotel, further proof that Zimbabwe is not a safe place to travel.

There have been about a dozen tourists killed by elephant every year in Africa since tourism began in the 1960s, and reporting a single incident is not in itself a good indication of relative safety. And that statistic, a dozen annually, is actually a very good one representing a safety level far higher, for example, than bear killings in our own national parks in America.

But the event last week is unusual. It does not fit the normal pattern of someone doing something wrong, and that is usually why wild animal killings occur, whether here or in Africa.

The man killed was an experienced guide doing everything correctly close to residential areas of Victoria Falls, Zimbabwe. His actions, in fact, were heroic. He placed himself between the tourist he was walking with and the elephant. The tourist remains unnamed but is alive and unhurt.

The account of the incident was not published until this past weekend, and that in itself is curious, although it is hard to extrapolate anything meaningful from that given the situation in Zimbabwe, today.

But taking the account at face value, the head guide at a popular safari lodge at the falls was with a single tourist watching animals at the lodge’s water hole. Many lodges are either built near water holes or cultivate them so that guests can watch animals while relaxing at the lodge.

This particular lodge had built a hide, or small enclosed structure, that allowed guests to get much closer to the water hole. Less common, it’s not necessarily unsafe. According to the single press report duplicated throughout the media, the guide and tourist had finished watching a single, aggressive bull elephant chase other elephants from the hole, when they began their walk back to the lodge.

The report calls the guide extremely experienced, and it is clear from the report that he gave his life for the tourist. It was reported that he fired his gun at the attacking elephant, but was not successful stopping it.

The tourist apparently wishes to remain anonymous, and both the lodge and tour company that owns the lodge, African Albida, will not elaborate further on the single press release issued last week.

I have been in several dicey situations with elephant, and lately I’ve become very cautious continent-wide. Nonetheless, the situation in Zimbabwe is unique, and I think this incident is more evidence that it is simply not safe to travel there.

The wildlife in Zimbabwe is under extraordinary stress, significantly more than in other African countries. This is caused by a combination of the country’s economic and political crises.

It’s been reported for some time that Zimbabwean soldiers, themselves rarely paid, are hunting elephant inside national parks. The normal protection that a national park affords animals normally translates into these animals understanding more or less the boundaries between hunting and non-hunting reserves.

They become more approachable within the non-hunting reserves and many spend their entire lives there, becoming used to vehicles and people. The densities of all animals are significantly higher within a national non-hunting park than outside one.

But once those boundaries are lost – as they have been in Zimbabwe – animals will revert to their best natures, their instincts for survival. It is altogether natural for a big bull elephant in musth to charge anything he can see.

Several years ago unscrupulous mostly hunting safari companies began to find ways themselves to place their clients in areas with higher densities of elephant.

A huge scandal developed in 2009 when an American company then calling it self “Cape to Cairo Safaris” actually advertised on its website that it had permission to shoot up to fifty elephants inside Hwange National Park, Zimbabwe’s largest and most famous national park.

The company has since removed any mention of the offer from its website.

Whenever wild animals are harassed like this, they can no longer be considered “safe to watch” using the practices that have become common with a half century of safari tourism. 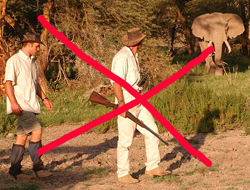 My own opinion goes further in the case of elephants, today. The elephant population – even within good national parks like Kenya and Tanzania – is too large, and this in itself leads to greater stress among the elephants.

I don’t believe anywhere in Africa is any longer safe to walk close to elephants, armed or not. And I insist that in the camps and lodges located among elephants, that they keep them away with careful practices like the use of air guns and electric fences.

But in Zimbabwe it’s a much different story, altogether. Right now, there are no safeguards against the dangers of elephants, there. The only way to be safe wildlife viewing in Zimbabwe is not go there.