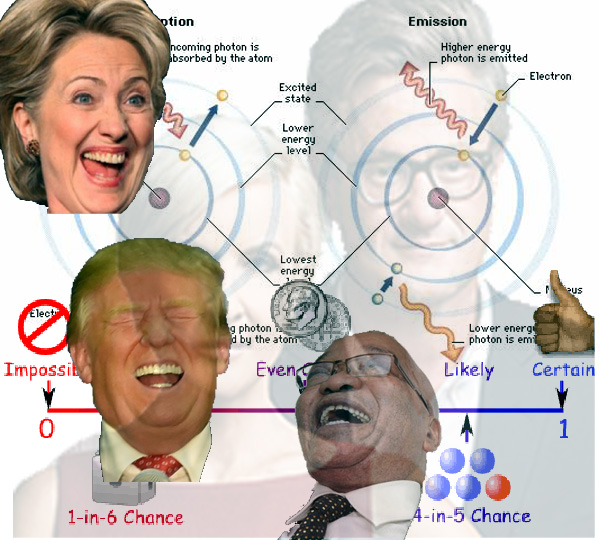 Call me superstitious but you’d be wrong. The world is so globally connected, media so lightning fast, that everything effects everything else in similar ways. Tuesday both the U.S. and South Africa may both have new presidents that the majority of their people don’t like and don’t want.

Both situations are coming to a head early next week. The date of the American election has been known for decades, but the date of Zuma’s fall only grew more certain this week with the release of the “State Capture Report.”

Details. Details. Two earth-shaking events are converging, because the world is so interconnected. In both cases an aggressive, organized and professional media is the single greatest reason for the convergence.

When I was a boy “pundits” were the authors of cartoon strips. “Commentators” were rare, eschewed if they dared also call themselves journalists. Today a “journalist” spends more time commenting as a pundit than they do reporting.

So news is not news but rather the interpretation of events. It’s probably more honest, because any reporting is subjective, but because we’ve discarded completely the notion that objectivity exists, we’re left suspended in a world not of facts but of a constructed reality from presumed meaning:

Commentary is loaded with prediction. The prediction effects stock exchanges, currency markets, economical forecasts and personal planning that is all then re-reported and becomes evidence of the plausibility of the initial prediction. The cycle moves faster and faster until it becomes determinant.

Around the world the shepherds of reality, the media, start to comment in rhythm. Motivated by themselves, we begin to watch societies half a world apart being pumped up then deflated in tandem. These crescendos and decrescendos like waves in the ocean converge into global tsunamis.

I know that much of the world has not followed the events in South Africa the way I have. And I’m sure that in places in the world I don’t follow similar events are also coming to a head.

It’s just “too unlikely” that these two dramatic moments in the history of the U.S. and South Africa are occurring at the same time for random reasons. They and many other events in other parts all over the world that I have no idea about will reach climax early next week together, because that’s the way the world works, now, and we Americans have the misfortunate of being on the tip of the wave.

The scary part, of course, is that we don’t know what comes after, because our reality in the world today is the unsettled percentage not the granite hard fact.