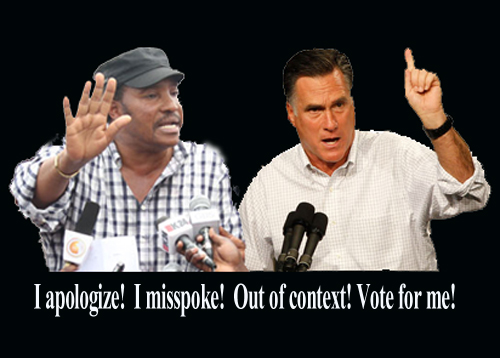 Slips of the tongue in Kenya – like the U.S. – trump any attempt by today’s wimpy journalists to champion truth. Unfortunately contemporary journalism deems what it inaccurately characterizes as “fairness” more important than truth, and the public has had just about enough.

Several days ago a minister in the Kenyan government called for the eviction of “Maasai” from his constituency during an attempt on the street to quell a demonstration that was becoming violent.

Several days ago a candidate for President of the United States derided half the population as moochers incapable of patriotic decisions while he was speaking to financial backers.

Both remarks revealed the true beliefs of their speakers. Both were incendiary, capable of spawning new and troubling events. And to be sure, there were journalists in both countries that so reported and ended their filings there.

But also in both countries there were as many if not more journalists who equivocated the event with the protagonist’s supporters rationalizations. Fortunately, at least this time, the public is having none of it in either country.

Ferdinand Waititu, a minister in the Kenyan government, raced to his constituency just outside the Nairobi airport two days ago to help quell a mounting demonstration protesting the murder of a young man. He was caught on a phone video telling the crowd to evict Maasai and basically laying the blame for the killing on the ethnic Maasai.

Like Romney, the speech was not intentionally secretly taped, it was just taped without prior notification. Its value was not preordained. Its value grew as the truth of the moment evolved in real time.

“Prior notification” was a great trick of gentleman journalists pretending to be fair. In fact, today, we’re probably all being taped all the time by one means or another, either by London MI5 as we sit snoring on a bus or by our children at a family dinner.

And that’s good. The technological revolution can’t equivocate. At least not yet. What it sees is what is, not what’s later spun or previously prepared.

Waititu in Kenya is now under arrest for hate speech. Kenya is approaching a pivotal moment next March as it holds the first national election since the ethnic violence of 2007, and admittedly the government is at least temporarily reigning in some human rights at least until the constitution and new president are in place.

There was nothing criminal in what Romney said, and probably not even hateful. His remarks were dismissive and – by the way – inaccurate, and as a mix portray a pessimistic and egotistical man that most certainly shouldn’t be president of the United States.

But both incidents display how bad currently journalism has become. It takes no rocket scientist to come to the conclusions above about each man’s remarks. But in today’s sick age of preposterous “objectivity” journalism in both countries taxed our time trying to minimize the despicable nature of the “truth.”

It begins with both men apologizing for what they said. Apologies aren’t what they used to be. They used to be shameful admissions and left real scars on those who offered them. And they were mostly considered a pivotal moment for the individual who signaled a change from one way of thinking or doing business to another. And appealing to our better natures, we the public would hopefully then forgive them, give them another chance.

Today apologies are as frequent as press conferences. They seem to have assumed the nature of little more than deflecting interest in the truth. Politicians like Waititu and Romney apologize for a mistaken remark as something insignificant.