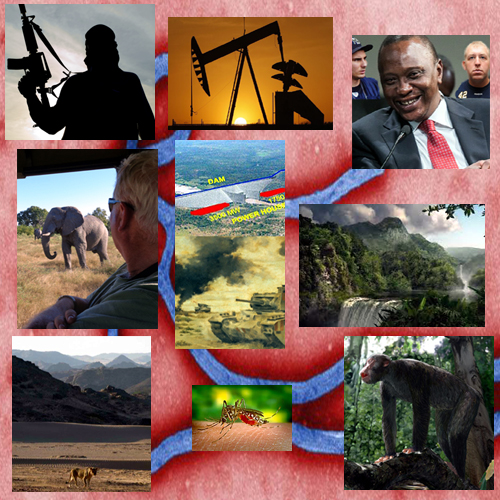 Ebola dominated the Top Ten Stories from Africa in 2014, and it remains a difficult learning experience for much of the world.

Come back starting January 2 as I spend a week discussing these stories in greater detail, but today here’s the synopsis:

The #1 Story of 2014 is the horrible disease that since first identified a half century ago emigrated from its common lair in remote jungles and started an epidemic in the disheveled and war-torn metropolises of West Africa.

But the story grew from there into the ignorance about and unmanageable fear that many people worldwide possess of Africa, to our own ineptness in Dallas, to the role of aid and the responsibility of those who live far away. The story’s not over, of course, although the irrational fears that drove it to such prominence seem to be.

The #2 Story of 2014 in Africa is terrorism. Kenya started the year in absolutely terrible shape with three major incidents monthly, but the year ended with reduced troubles and what feels right now like incredible new security. Yet this security is coming at possibly a terrible price for Kenya’s new democracy.

The #3 Story of 2014 is something of a sleeper: The decline in energy prices attributed in large part to America’s new prosperity in oil and gas recovery is a sledge hammer ready to fall on the developing world. The reasons are almost counter intuitive and therefore that much more sinister.

The #4 Story of 2014 is the end of the trial of Uhuru Kenyatta at The Hague. The ICC trial of the President of Kenya, indicted for crimes against humanity, was suspended indefinitely when prosecutor’s evidence and eye witnesses slowly but surely disappeared. It’s an onerous tale with a conflicting morality.

The #5 Story of 2014 is that for all practical purposes the War in the Congo if not actually over is definitely petering out. This was a multi-generational war that only a few years ago seemed impossible to end. It’s a happy, positive story for which America gets much credit.

The #6 Story of 2014 is the increasing conflict between man and beast in Africa, an age-old story that today pits elephants and their tusks against increasingly rapid human development.

The #7 Story is the sudden but very serious conflict among otherwise friendly African states over the water rights to The Nile. This got little press in the world media, but it’s shaking these countries to the core.

The #8 Story is how global warming is causing a decline in Africa’s visible biosphere, its big game. This doesn’t suggest that global warming isn’t the most pressing story for the world as a whole, but rather of one very important and unexpected aspect that is seriously effecting Africa.

The #9 Story is a wonderfully beautiful piece of the prehuman archaeological puzzle at long last fully understood, the fact the proconsul does appear to be the precursor to both apes and humans.

And The #10 Story is also good news: Breakthrough research on yellow fever is likely to lead to new and quicker cures, but remarkably not by eradicating the virus, but genetically managing it once it’s in the liver so that it can’t perform its mischief!

Return to this space starting on January 2 as I discuss these stories in greater detail. Meanwhile, my warmest wishes to all my readers for a happy and prosperous New Year!