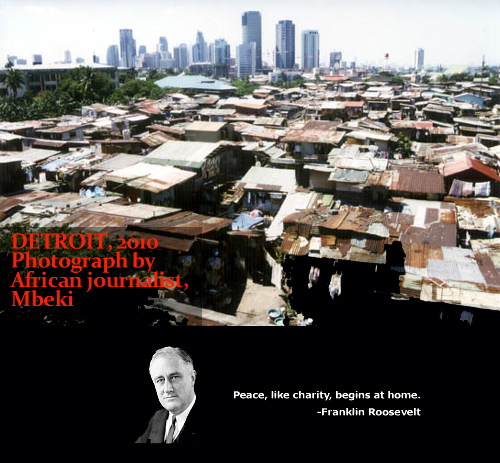 Charity begins at home: In my estimation that means creating good government.

At this time of the year I get numerous requests from my generous and truly sensitive clients regarding charities I recommend in Africa. They are often surprised.

There are two reasons I discourage charity, whether to Africa or anywhere.

First, especially in Africa, charity is often a massive con game. There are many excellent not-for-profits doing heart warming work in Africa, but unfortunately there are many, many more that cause more problems than they solve.

Second, charity by its very nature coopts the responsibility that any reasonably moral society should take on its own. So by your act of charity, you are perpetuating the immoralities of your society.

The second reason is a contentious one, I concede. So for those who disagree with me on moral terms, my basic message changes to “stick close to home.” Charity is meaningless if wasted. All it does it make you feel good while possibly doing serious damage.

Besides, we are rapidly approaching the time when poverty caused disadvantages like illiteracy are greater in parts of America than in the developed world.

I do due diligence in Africa. Good African charities are extremely few in number. They include Catholic Relief, World Vision and Médecins Sans Frontières.

Donations to many other large Africa involved organizations like National Geographic or the World Wildlife Fund are nearly useless. Their projects have become so massive they rely on their endowments to survive, diluting any individual giving to the point of meaninglessness.

Donations to smaller often locally created charities in specific countries, or to smaller church-based foundations, are usually destructive and anti-developmental. They are so mission focused that while they may indeed be helping a small group of people, more often than not they conflict with the greater social and governmental policies of the area.

One of America’s largest youth-based volunteer organizations, DoSomething.org, reports 11 facts about current America that are likely more egregious than in many parts of the developing world.

Consider this. Morning Edition reported today that in clustered communities of 10,000 children in Philadelphia there were only 33 books.

Literacy is difficult to specify, because different parts of the world define it so differently. UNICEF is the best mediator of literacy statistics worldwide, but the problem is that UNICEF does not generate literacy metrics for the United States. But clearly, literacy in that Philadelphia community is not good.

According to UNICEF, Kenya’s literary rate is just above 72%.

Why, then, would you send books to Kenya and not to distressed Philadelphia?

The conundrum of wanting to do good but being unable to do so will only be remedied when we create a society with a government that is trusted and moral.

That should be your greatest goal of the new year, not getting a tax credit.