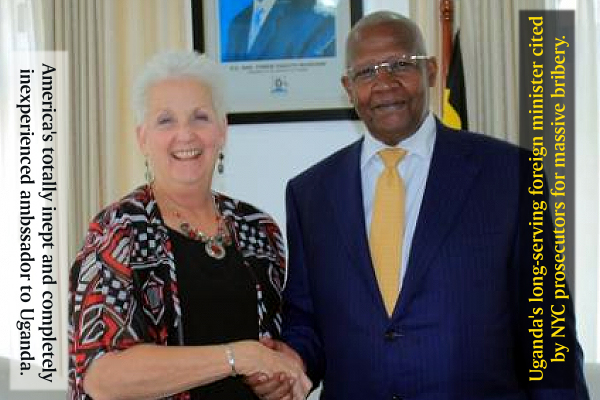 These four questions, which hover over practically every action by high American officials today, are perfectly illustrated with an example in Uganda. Following citings for massive bribery issued by New York prosecutors against Uganda’s foreign minister, the Trump administration holds high-level meetings with the accused to praise him.

Sam Kutesa, who recently stepped down as President of the United Nations general assembly, was cited for corruption and bribery in late November in New York. He was not charged with a crime, because of a combination of his diplomatic immunity and the cleverness with which he arranged the scheme.

The fall persons for his scheme turned out to be officials from Hong Kong and Senegal that Kutesa had brokered as business partners for a Chinese energy company.

Part of the masterful deal included Kutesa’s $500,000 bribe and assurances to the Chinese that they could acquire an Ugandan bank if they included ceding some ownership to Yoweri Museveni, the president of Uganda.

Following the indictment and continuing investigation, court documents developed a long list of American crimes involving Kutesa including the setting up of a false U.S. charity for laundering money.

From within Africa this seems like little more than business as usual, particularly in an autocratic state like Uganda.

But from without it’s patent corruption with bribery, and until the current American regime took office would have easily been cause for public rebuke.

Instead several weeks ago, the State Department arranged a high profile meeting between our new (and completely unqualified) ambassador to Uganda with Kutesa, including a photo-op filled with smiles if not laughter that the Ugandan government has extensively circulated.

The State Department readout said the “productive meeting” was to discuss “security and peace” with a “close American ally.”

The far right has always had a love affair with Uganda. C-street Senators and Congressmen were often seen in Uganda during the Bush Administration and all sorts of unusual aid flowed into the country, then, just as Museveni was completing another genocide and consolidating power.

Laws against abortion, gays and transgenders, and even Muslims (in a country with quite a few) were promulgated after intense C-street lobbying and American support.

But the question is, does Trump know this? Does even Tillerson know it?

Probably not. So why produce a public event with persons who were clearly your governmental adversaries in the past?

Vengeance? Is Trumpism just doing everything it can as pay-back? Pay-back for what?

How about contrarianism? Because the action clearly aroused criticism among Trumpism’s critics, and even Tillerson could probably figure that one out in advance, just do it because they don’t want you to?

Or, as I’m inclined to believe, this is nothing more (or less) than stupidity. It’s more likely that it was Ugandan initiatives that fabricated this whole scene. The whole wide world knows how inept and unprepared American diplomacy is today. So Win One for the evil forces of Uganda.

Stupidity lacks some of the fire and brimstone of the other possibilities and tends to minimize the power of Trumpism. But over a long enough period of time, it cedes so much American power that it arguably becomes a security threat.

Ah-hah! Collusion! So the same cartel that staffed Trump’s campaign with Russian spies, hacked Hillary’s emails and messed with our election is now organizing these little one-off, remote tête-à-têtes?

No. It’s stupidity. Unless, of course, it isn’t the Russians at all that are involved in all these other mind-bending conspiracies, but rather, just the neo-con from C-Street. Now that seems plausible.