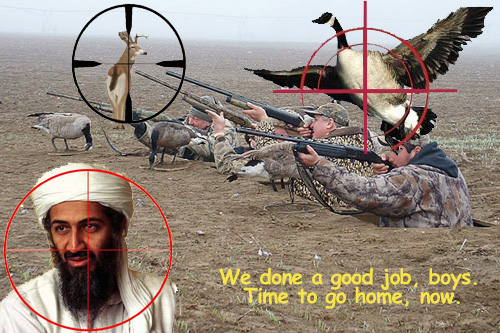 Hey chums, time to end the war on terror! We successfully pushed it into Africa! And they’ll do much better once we get the boots out.

The modern war on terror is like suburbanites trying to eradicate deer and geese. Few homeowners are ever hurt by deer and certainly not by geese, but their gardens are eaten and zoysia lawns defaced.

And “everyone knows” of the dog that was bitten by a stag, or the young oak trees eaten to the ground in the precious county forest, or the toddler nipped nearly to death by the hen’s beak, and – horror of horrors – something so truly horrible it must be given an anagram: CWD.

It is precisely the juggernaut of thought about CWD that tips the balance in the county finance committee to hire that sniper to go into the lagoon and start shooting. After all, CWD does exactly what the suburban homeowner wants it to do: kills the deer.

But fashioning goodness from simple reactive evil, the homeowner begins to feel sorry for the poor wasting away antelope. Euthanasia is wrong, but execution is right.

This is so similar to terrorism.

Nine-Eleven did ultimate harm to 3000+ people, but at the time there were more than 300 million living in the U.S., another billion or so in the countries represented in that awful carnage. So the vast, vast majority of human beings were not effected … except by terror.

By the fear it would, somehow someday, happen to them or those close to them.

The war on terror, though, has much realer consequences for all of us. It’s costly, it allows invasions of our privacies not otherwise possible, and it allows a small handful of people – mostly the president – to assassinate foreigners at will.

The last removed power that the war on terror conveys actually effects us directly. Our own behavior changes when our leader can murder at will.

When you think about, it’s worse than horrible. We have grown complacent about murder.

Numerous analysts last week suggested it’s time for America to end the war on terror. It makes a wondrous peace headline just before the holidays but it carries powerful implications for American policy.

Journalists like Rachel Maddow and Fareed Zakaria have been joined by experts close to the government.

The reason for this is pretty simple: the assault on terrorism carried out especially by Obama has succeeded. Like with deer chomping roses, we have exported the problem to our periphery.

Culling deer or blasting away geese has never successfully reduced either an existing regional population or any population trends. But it does move the problem away – to the edges of your existence.

Culling deer in the Chicago suburb of Skokie moves the problem further out from the city into more rural areas, complicating life there a little bit more as a result.

Obama has successfully routed al-Qaeda and with the weekend’s drone assassination of Abu Zaid al-Kuwaiti in Pakistan, the last of Osama’s Old Boys Network is gone.

With the effective fall of the town of Jowhar in Somali last week, al-Shabaab is nearly gone, too. Somalia, which became the dustbin of terrorists worldwide as Obama’s wars in the Afghan region intensified, is essentially now no longer under terrorist control.

It is under the fragile control of countries like Kenya and Ethiopia, that are now carrying the burden of the war on terror.

Even much smaller and more regional groups like the Lords Resistance Army are on the run, presumably from U.S. Special Forces in the deepest central African jungles.

America’s War on Terror – at least as regards America’s land itself – is over.

The strongest argument against ending the war on terror, is that it isn’t eradicated worldwide, and worse, where it still flourishes (in Africa) the powers there are much weaker than us. I.E.: They Don’t Have Drones.

True TDHD but they will be much more successful wiping up the residue than we were. The so-called terrorists are much closer to them ethnically and historically. There is a much greater need to pacify militants and integrate them into society.

Right now you might think that doesn’t look real good: Terrorists hold half of Mali, most of the CAR and are detonating bombs in Nairobi at the rate of about one per month.

But it’s nowhere near the confusion and destruction that Afghanistan was less than ten years ago, or even that parts of Pakistan are today. Nairobi today is probably nicer than Belfast 20 years ago: Africa will take care of itself, much better and quicker if we withdraw.

That leaves … Afghanistan and Pakistan.

It’s been more than a year since we announced we will be out of Afghanistan in little more than another year. Theoretically we never invaded Pakistan. I’m no expert on the region, but I wonder if eliminating drone assassinations would not actually have a positive effect on our security. When we take our boots out, drones will be all that’s left.

So happy holidays, all. Peace is near at hand?