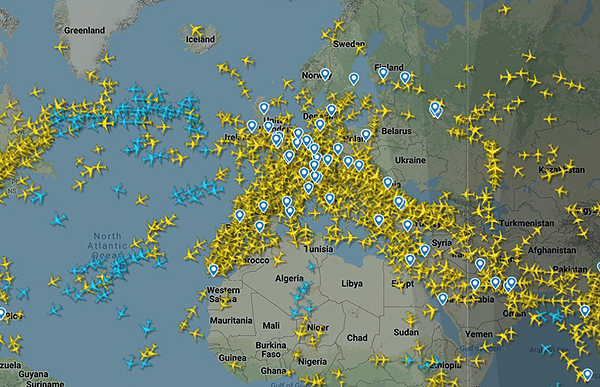 At 10:05a Chicago time, 4:05p London, 6:05p Kyiv today, the air planes flying over much of the Northern hemisphere were exactly as shown in the picture above. The question is how much larger will the blank circle now positioned over Ukraine grow.

Don’t ask a travel agent. The Washington Post did yesterday and miracles of miracles you can’t believe how surprisingly safe and wonderful traveling to nearly any part of the world is! Better journalists at NBC asked consumers and travel investors, and there’s no question that the surge to travel has come to a near full stop because of the Ukrainian war.

Sunday the Delta SkyMiles consortium came out with an unbelievable ticket sale. The price of a business class ticket was less than some economy tickets.

Those few seats were snatched up in less than 24 hours, but the impetus the airlines expected would motivate all sales didn’t materialize. Airline ticket sales have dropped through the basement.

The fact that even Alaskan bookings from the lower 48 have been hit suggests far more than just the fear of flying through a barrage of missiles. It’s uncertainty, something all of us have suffered for so long that we now feel victimized by it.

A week into the war and the actual travel going on right now hasn’t been hit too hard. The picture at the top of this blog proves that — outside Ukraine and west of Russia it looks pretty normal.

There are slightly more blue planes than normal. Blue represents aircraft tracked by satellites. Yellow are aircraft tracked through their commercial company, like British Airways. So blue is usually non regularly-scheduled aircraft like irregular cargo flights, military aircraft, charters and any private aircraft.

Of course virtually all of the passengers and cargo on most of these planes were booked long before the war began or was even imagined.

The major North American airlines announced about a month ago that they were doubling the number of aircraft scheduled to fly between the U.S. and Europe for our summer months. So far there has been no reversal announced of that policy, and anyone trying to buy a ticket knows how tight space is for the summer.

But what about you? What if you have been considering planning travel in the next six months but haven’t yet committed. Should you?

No. You should wait and brace yourself for the possibility that it might be twice as expensive as you expected if everything clears up and you then decide to go later. As I’ve said all my career, travel should be fun. Planning for something that is unpleasant will never be cheap enough.

On the other hand have you ever played the lottery? The loss of funds that you might commit now for something that proves too unpleasant to use later in this travel environment represents a gamble that’s hard to pass. If you’re prepared to go no matter what the cost is likely to become, and if you believe the odds are pretty good things will calm down, it will be a memorable wager which you achieved.

Myself? I’ve flown into and out of and around slinging missiles all my life. I’m not the one to ask. In fact I’m even sort of embarrassed talking about it. My thoughts are with the Ukrainians not the beach.