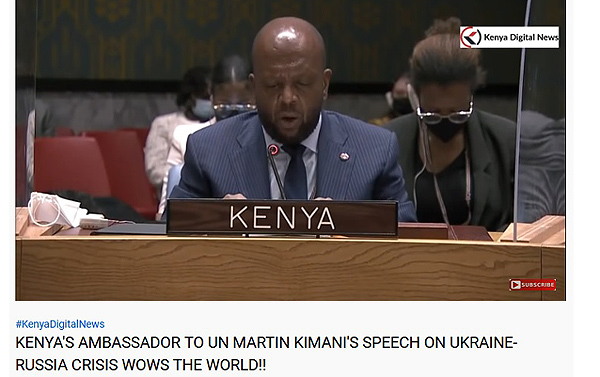 My surprise has turned to anger. A life of empathy with Africa’s condition riles my intellect. What the hell is wrong with Africa, the part of the world that has suffered more from foreign occupation than any other?

Alone among Africa’s 52 countries Kenya vociferously condemned Russia. A few others, especially Guinea and Gabon, criticized the “invasion” and in a nearly laughable but unsuccessful slap-on-the-cheek to Russia South Africa suggested Russian troops withdraw. But only Kenya called the spade a spade: Russia has started war.

Kimani like me cannot understand the rest of Africa’s reluctance to affirm its own soul. He beautifully explained in just a few minutes that virtually all African borders are unnatural reflections of the region’s actual history and that the claim by Russia that at least parts of Ukraine are actually Russia is absurd in the modern world.

“Had we chosen to pursue states on the basis of ethnic, racial, or religious homogeneity, we would still be waging bloody wars,” he explained to the Security Council.

Russia proffered no stronger argument, so there is no justification for an invasion.

“The territorial integrity and sovereignty of Ukraine stands breached. The Charter of the United Nations continues to wilt under the relentless assault of the powerful,” Kimani concluded.

Why are countries like Egypt, South Africa, Morocco and Nigeria so mute? I’ve read numerous explanations, mostly having to do with mercantile concerns and energy supply lines.

Some make sense in that regards, but what bothers me is giving them precedent over very, very basic first principals. Ones that are specially germane to Africa.

Yes, giving in to distant aggression might give you another generation of oil, but what thereafter if the evil victor cares little for first principals like national sovereignty?

Another commonly heard explanation particularly on social media is that the West committed such atrocities during colonial times that they were essentially acting as slave masters. Now that Africa is free what motivation have they to come to the assistance, even oratorically, of their former masters?

And the only way to ensure that dictum is for the wronged to remain righteous. Tomorrow the UN meets in a full, emergency General Assembly. Fifty nations are lobbying for a condemnation of Russia. We have our notebooks ready. How many Africans will rise to the challenge?

I think the reason so few in the developing world may rise to the occasion (India abstained in condemning Russia in the Security Council) is that their leadership is so weak. Politics is too awfully malleable, and right now the personal power interests of so many world leaders have taken precedence over their moral responsibilities.

Truly democracy in the “Free World” has not worked very well in the last decade or so. That’s the leg up China has and the reason crazy Putin pulled the trigger. But the stiff resolve of the Ukrainians is inspiration for all the latent patriotism and social goodwill left on earth. If this conflict ends well for the Free World, the spineless leaders who were hiding in their closets might just as well lock themselves in forever.