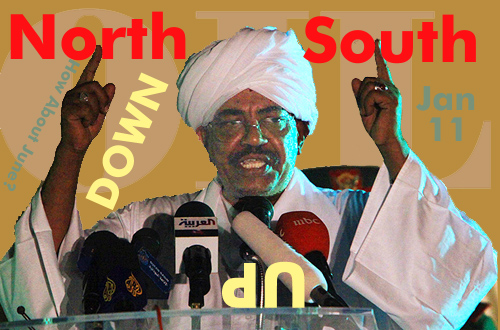 Guess what? After a generation of war the peace of a richly endowed part of Africa the size of Texas all comes down to … who gets .. That’s it! .. The what? OIL!

I’ve been writing for several years, now, that I believed – almost counterintuitively and certainly contrary to many observers — that southern Sudan would become a peaceful nation next year. Well, I might have been wrong. But not by much. It might be just slightly delayed as everyone works out who gets rich and who stays poor.

This week we watched some confused hand gesturing by Sudan’s current president, some rational talk by its senior foreign minister, some hand slapping by Hillary Clinton, and some sabre rattling by those expected to become the new South Sudan government. It wasn’t exactly getting ready for a ribbon cutting ceremony.

Other than the Balkans where the combined power of world force shellacked peace to death by imposing the breakup of existing states, or before that the implosion of the Soviet Union by capitalist viruses, there have been no breakups in existing countries in the world.

According to my calendar of state breakups, this was the next one. January, 2011.

The planned breakup of Africa’s largest country, The Sudan, into larger but poorer north and smaller and richer south, was the embodiment of a truly historic peace agreement in 2005.

Extreme, dictatorial and xenophobic Sudan agreed to a referendum. (That meant that individual southern herdsmen who were shot ten years ago if they looked a northern soldier in the eye were supposed to find a ballot box while keeping their eyes on the ground.)

The outcome was obvious from the beginning. The South would become a separate nation. Referendums on a separation are never scheduled because of uncertainty. When there’s uncertainty, unity rules.

The South and the soon to be “North” were never meant to be, anyway. The culture, religion, even geography is considerably different. Like so much that’s wrong with Africa, this was Britain’s fault for believing that contiguous deserts and swamps belonged together because there weren’t any cities in them (at the time).

Only needed one governor, then.

The point in scheduling a referendum is to give the divorcing parties time for counseling. You need to work out visitation rights, alimony, and the thorniest problem of all, oil.

Well, everything’s been worked out right on schedule except … oil.

I just don’t understand why this surprises everyone. Today’s headlines are running around the world proclaiming war.

War won’t happen. Peace is coming, but it might be delayed, so just breathe slowly. And who gets the oil will be decided in The Sudan long before Sunis, Shiites and Kurds decide who gets it in Iraq.

That is not to say that, like in Iraq, the uncertainty or poor agreement does not set the stage for civil war a decade hence. But my prediction stands. Sudan will become two within a few years at most without anymore fighting.