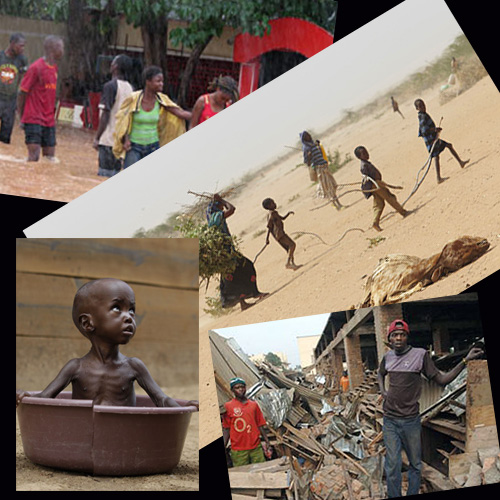 The season is changing all around the world. Unusually heavy rains are pounding sub-Saharan Africa. It snowed early at my home near the Mississippi River. Typhoon Haiyan may be the world’s biggest storm. Is Africa, or any of the developing world, ready for climate change?

Today Bloomberg estimates that Typhoon Haiyan will destroy 5% of the Philippine annual economy, which if adjusted to America’s economy would represent more than a half trillion dollars. If Bloomberg’s current estimate is as low as it was for Sandy, the representative destruction to America by a similar situation would approach a trillion dollars.

And climate destruction in the developing world is far more devastating because there is so little preparatory relief, so much difficulty in rebuilding much less just clearing the debris.

November is when the monsoon changes in sub-Saharan Africa. The change ends a long dry season, not so completely different from spring in the northern hemisphere ending the relatively dry winter.

Every year we waited with utmost impatience for the rains in November. We were ready to plant our gardens, the endless heat which grew steadily was tedious, and I remember sitting on a small boulder behind my house looking up hopefully at the sky.

The first rain was usually a good, hard rain. There was immediate change. Temperatures dropped, as did tempers. The dust was cleared from the air. We had to close the doors to keep the snakes out, and literally overnight new grass grew.

But it’s much different, today. The “good hard rain” is now a torrent.

Robin Pope Safaris in Zambia reported yesterday that Zambia’s Luangwa National park “received an inch in just over an hour – a lot of water created a lot of mud!”

An area that normally gets very little rain all year long in northern Kenya was so flooded over the weekend, relief efforts are stalled.

And in another desert area of Somali, 100 were killed by rain and wind over the weekend by a freak cyclone that made it up the Red Sea.

Any one of these stories would be unnaturally big news ten years ago. Now, it’s just one of dozens if not hundreds of news reports of climate calamity. Nothing is “freak” anymore.

It snowed at my home, yesterday. This is two weeks earlier than normal. No big deal, right? The temperature was 13F when I walked the dog at dawn. The normal low is 31F. Nothing to worry about, right?

Maybe not in northeast Illinois. Maybe not even in New York City right now with its elaborate weather disaster plans and remarkable disaster insurance.

Not quite the same for the guy who would like to get his millet planted in Somalia, or the young businesswoman in Tacloban. Or for the child trying to go to school in Mfuwe.

There are other ways to dominate your adversaries than by war.