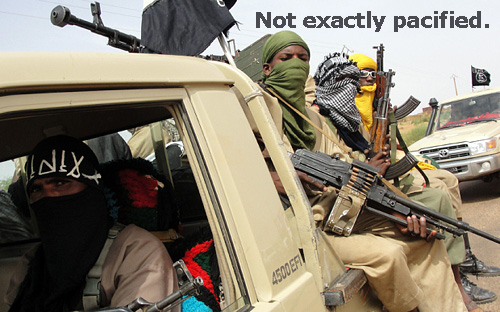 The deteriorating situation in Mali this week made me realize the crises throughout the world aren’t clashes of ideologies or religions. It’s so simple: the Have Nots are rising.

Mali, you might remember, was the final joint success story of the Obama/Hollande alliance to defeat terrorism in Africa.

Since the Kenyan invasion of Somali on October 16, 2011, I have chronicled in my blogs the slow but methodical Obama/Hollande alliance that pushed the Afghani/Iraqi bad guys to Yemen, to Somalia, through East Africa and to Central Africa, thence finally to Mali.

Where, I wrongly presumed, they were finally clobbered to death by the French foreign legion in January, 2013.

I should have read more carefully my guest blogger, Conor Godfrey, who so passionately described the shock of a Mali suicide bomber which followed in February, 2013.

I mostly ignored that piece by Conor, who is now with the State Department and then as now has one of the finest analytical minds about Africa. That was a mistake. I jumped the gun. Mali was not pacified.

The insurgents that I believed were swept up into a single pile and ultimately defeated by the French Foreign legion that scattered the few remaining fugitives to doom in the Sahara, is now threatening central Mali.

Conor’s piece in 2013 expressed the surprised horror that a suicide bombing had taken place in Mali.

If you asked a random American if there were any suicide bombings here, what percentage do you think would say “None?”

To date this year alone, there have been 285 mass shootings in America, and while I have not had the time to go through them one by one to determine how many ended with the shooter killing himself, I know it was more than several.

That is simply a more modern consumer society’s suicide bomber. It’s easier in America to get a gun than make a bomb.

America is not yet threatening to implode like Mali, even with today’s announced resignation by John Boehner. But the acts are identical, across radically different cultures and historical time zones.

Whether Charlie Hebdo or Boston or Chechnya or a Finish island, people are blowing themselves up in order to kill others.

“Maybe somewhere where life comes a little cheaper, and craziness prevails. This is nonsense…”

He suggests that it might be “blowback from our global war on terror.”

But folks, there has to be a common thread among all these seemingly disparate places and peoples, something that as horrible as it sounds, connects the bomber in Mali with the bomber in Colorado.

In ancient history legions of soldiers knew they were headed into sacrificial battles. But not really until the age of kamikazes did “suicide war” become an individual act.

There has always been desperate dissatisfaction with life by individuals, but the kamikaze, the suicide bomber seems fundamentally screwed up, totally irrational.

Unless you really embrace the concept of hopelessness. Everything is then lost. There is no more morality. Vengeance is the only possible success.

People become hopeless for a lot of different reasons. Many are obvious, like hunger. But many are more complicated, like losing a job. (US 2015 Mass Shooter #246, Vester Flanagan.) But certainly this isn’t just a feature of our modern age. So what is?

Guns and bombs. Never before has such powerful destruction been so easily obtained by an individual.

Hopelessness. There really seems today to be an unusual amount of this worldwide.

Anger. Today we worship and encourage anger like never before.

Hopelessness curls the finger around the trigger. Anger pulls it.

All three are needed for the tragedy. We gotta work on them all, and quick.