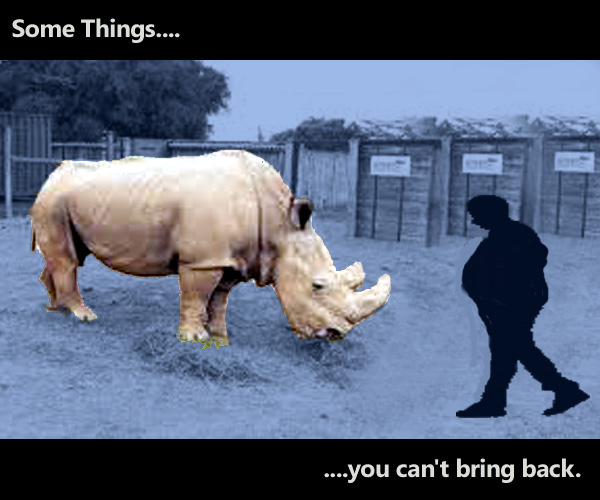 NPR’s fuzzy wuzzy reporting in the last few days about the northern white rhino is high school journalism. I’m not suggesting that this story needs the due diligence of Jared Kushner’s Russia contacts, but what is an important battle between science and performance NPR has reduced to a smiling emoticon.

NPR reported as if it were new a crowdfunding campaign for in vitro fertilization to save the last three known surviving northern white rhino. In fact the campaign has languished for more than sixteen months. And there are good reasons it’s languishing.

NPR reported correctly that the organizers of the campaign set a monumental goal of $10 million. But NPR neglected to report that after sixteen months less than $25,000 has been raised.

Even the laymen of the public recognize that the scientific goals of the program are extraordinarily problematic. That in itself, of course, isn’t a reason to impede scientific inquiry, but when framed in the gargantuan scale of funding they’re seeking, it becomes absolutely ridiculous. To me it even suggests ulterior motives.

The whole sad story of the northern white rhino is one of the most unpleasant in all of conservation. Were I to write a book about this I’d start with the conclusion that everything that well-intentioned conservationists and scientists did to help the poor animal over the last thirty years managed nothing but its earlier demise. Search for “rhino” on my blog then take to your bed for at least the whole weekend as you labor through my reports over the last decade.

I remember so vividly an early safari in Meru National Park in Kenya, long before there were fancy lodges or tented camps. We had to throw down a camp. Our bathrooms and toilets were the “ablution block” maintained near the camp sites by the parks service. This was a long rectangular block of sinks and mirrors, commodes and shower stalls that actually worked pretty well for that time.

I remember watching Charles, our most reluctant safari member and also the oldest, walking to the ablution block from the pup tent that certainly hadn’t given him a very good night’s sleep. As always, he was stooped over slightly as he carried the world on his back.

He watched his feet walk, not where his feet were taking him. A toothbrush stuck out between the flaccid fingers of his left hand, which as it wiggled seemed to be divining his path.

I was sitting on the ground yoga-style about 25 meters away at the entrance to my tent pondering whether if as guide I should save Charlie from imminent catastrophe or maybe just let fate create a few better days on safari.

Because Charles – unbeknownst to himself or probably anybody but me – was heading yes! towards the ablution block but! between Charlie’s wiggling toothbruush and the ablution block was a magnificent, over-sized even for its species, great northern white rhino.

Even the poor technology of the 1970’s satellites must have been able to detect this magnificent monster from outer space, but Charlie who was trudging upon terra firma heading straight into its tire-sized horn, didn’t.

There’s a soft ending to this particular story.

Northern white rhino, as fabulously huge (~ 3 tons) that they can be, are docile. They seemed to have been turned immobile by their girth. Totally unlike their mendacious little 2-ton black cousins, you can almost go up and pet them.

It didn’t move and I swear that Charlie never saw it. He probably smelled it, but then he complained constantly of all the smells on safari. It didn’t move until the tap in the ablution block was turned on. The sound of the running water was actually what probably drew the animal to the block in the first place, so that wasn’t what freaked it.

But when Charles started to grumble loudly about how slowly the water was coming out, magnificent monster turned his head, then his body and ambled slowly away.

If only I could have done that.

But the years that followed were not as benign as Charles to this wonderful animal, and it is now truly about to go extinct. DNA studies first started in 2010 satisfy me that the animal is different enough from its cousins that when it dies so will part of the world’s wonder, including wild immunity to the tse-tse’s sleeping sickness.

But there are only three left alive and they’re old. The frozen 30-year old cells in San Diego probably don’t contain enough genetic diversity to produce viable offspring, even if the insurmountable difficulties of in vitro fertilization are overcome.

So in today’s world of strapped cash and strapped generosity let’s be real. There’s so much else that needs to be done to save other rhino that can be saved, it’s time to let this magnificent monster rest.