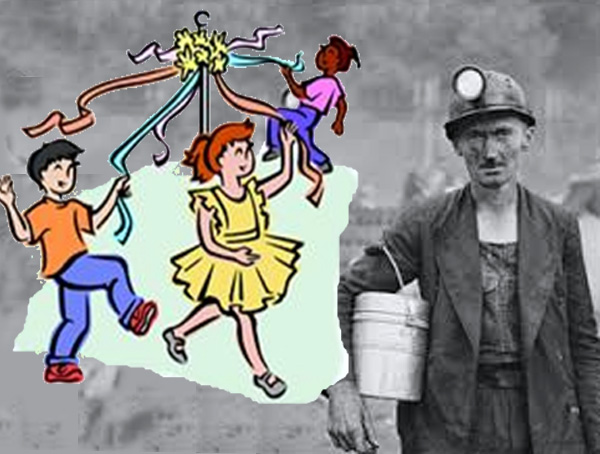 Much of the world takes a holiday, today. All of Africa’s largest and most powerful countries are on holiday. May Day carries a morbid tradition of celebrating the horrible mental and physical tolls on workers in the second millennium.

So who isn’t a worker? Is Trump a worker? Is Nigerian Aliko Dangote a worker? Is the poor Joe who was once a miner in Appalachia still a worker? Everyone and no one is a worker, today. This is a false moniker for the modern age and it leads us into a sort of dangerous nostalgia.

Virtually everyone believes they are over worked. Yet the truth is that relatively speaking there are very, very few people in the last generation who toiled all their lives in manual labor. Theoretically this is what May Day celebrates: the big biceps and generous soul of the guy willing to kill himself for a lump of coal.

Historically speaking I couldn’t revere anyone more. But history is in the past, folks. There’s nothing we should wish for a coal miner today except that as quickly as possible he’ll stop being a coal miner. Trying to extend this antiquated profession is inhumane. All our attempts to do so result in nothing but more suffering.

The number of hungry stomachs in the world is increasing faster than the farm fields that feed them. This has led to avarice then gluttony as once someone finds the gravy train she buckles up and fires the boilers. This has bifurcated the world into just two parts.

Despite flowery statistics lauding the reduction of worldwide poverty, there are many more getting poorer than richer. It’s laughable how far behind the monitors of poverty are in their methodology defining it as a certain point, rather than a relative one.

Poverty may once have been defined as not having enough food to eat or water to drink, but not today. Today it’s more likely defined by not having enough nutritious food to eat and no lead in your water, and using the second definition most certainly results in poverty showing no decline.

So let’s shake this fascination with workers and jobs. Take a look at the prosperous parts of Africa:

Many parts of Africa are doing well, today, by their own reckoning. Perhaps the best example is urban Kenya where a 3-bedroom single residence home now commands a price similar to Houston’s. Yet even the best of statisticians will tell you that gainful, traditional employment among Kenya’s middle class is probably less than 75%. So does this mean 25% unemployment?

Sort of, and sort of not. Urban Kenya is retooling more quickly to the modern age than America, that’s all. More kids are independently working as tech consultants or handymen or whatever, but outside the western notions of gainful employment. Good news, yes, but there’s also a heap of bad news that goes along with it. The economic divide in Kenya is increasing faster than in the United States.

But I think the Kenyan model has a better chance of eliminating real poverty than the American one. There’s little talk in Kenya about “jobs,” for exactly the reason explained above: “jobs” as traditionally defined are gone, and they’re not coming back.

No one in Africa is racing to develop its huge coal reserves. There’s no need, anymore, for more miners. What’s needed are app developers and communication consultants. What Kenya is doing is dedicating a massive amount of its resources to education dedicated to these modern vocations.

The world as a whole averages about 14% of public revenues for education. Kenya and South Africa each spend 20%. The U.S. spends 13%. Trump’s budget axed a huge amount of federal funding for education in Appalachia.

Let’s stop talking about “bringing the jobs back.” We don’t want to bring back push lawnmowers or horse-and-buggies. We want better and cheaper smartphones and cheaper and more reliable electricity. We don’t want any more coal miners. We want software engineers and app designers. And in the transition there will still be plenty of jobs for hard hats, just not lost in the past.