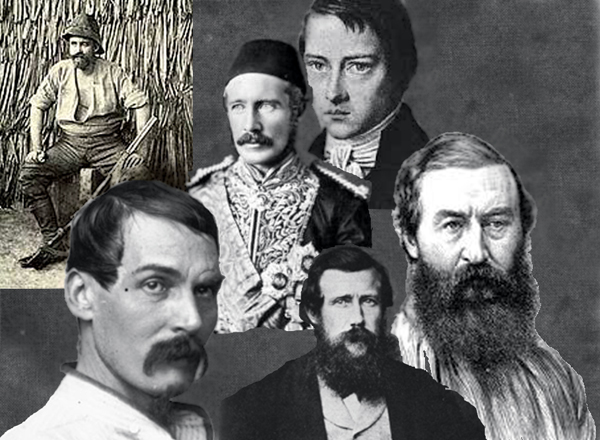 The explorers of Africa provide us with an understanding of our turbulent and uncertain societies today in a way none other can.

Tomorrow at 3p at Dubuque’s Free School I’m giving a lecture about Stanley finding Livingstone. If you’re coming to the lecture you’re under a solemn oath to keep this blog to yourself until I finish. Because this is the punch line:

Endless analysis by media celebrities, tedious pontificating by worn out politicians and that incessant certainty by self-appointed historians whose main accomplishments seem to be they can write long books might indeed help us out of our current political and social messes. But none can explain it like Livingstone. None can help us prevent it happening again like Ibn Battuta.

The Trump/Le Pen/Brexit/North Korea/Duterte phenomena is clearly not the manifestations of individual evil. In fact as helmsmen of their self-destructing societies these are rather nondescript people.

There are hundreds of TV show hosts with yellow hair, fat crazies, Al Capone makeovers. These are not calculating individuals, they’re all dupes and pawns. They were simply in the right place at the right time to represent an indomitable human society craving for change, and they rather than some intellectual nerd were chosen because the nerds were fastened to the status quo.

The established, institutionalized world leaders and intellectuals were afraid to experiment with change.

So this is what we get, and all the great early explorers of Africa could have foretold it in a blink at the campfire.

The passion for wonder, for change, for stepping into the unknown has been sternly suppressed.

Most explorers you’ve never heard of it and never will, because most explorers perished. And “most” is a lot, maybe 99%. That’s what it takes to explore, the willingness to perish, or in a less melodramatic turn of the phrase, a willingness to fail.

“I am prepared to go anywhere, provided it be forward.”

No, that wasn’t said by a Trump supporter. It was said by David Livingstone, one of a number of men I’ll talk about who was driven – perhaps insanely – by a lust for wonder.

We lost that in the last 150 years despite the few noble tries at resurrecting it. Society defunded education, glamorized financial success, turned styles into cults and started everyone beginning their day with their palms flattened on their shirt buttons saying the pledge of allegiance.

The Ericsons, Erik the Red & Leif, discovered new worlds because when blown off course they didn’t try to come back. They headed pell-mell into helplessness. Probably thousands others who are lost to antiquity did as well. And it kept the human spirit alive and well.

Ibn Battuta was 21-years old when he told his father he was making the Hadj to Mecca, normally about a two-year journey from Tangier in the mid 14th Century. He came back 24 years later! At the end of his life he’d traveled 75,000 miles and wrote, “I had no goal until I returned. I am content that I have traveled the earth.”

So with all us ornery individuals refusing to explore, step into the unknown, take risks, our collective self will. And as I said, most exploration fails.

(The Dubuque Free School runs from 9 a.m. – 4 p.m. tomorrow at the Prescott Elementary School at 1151 White Street. Open to all. Don’t bring your SATs.)