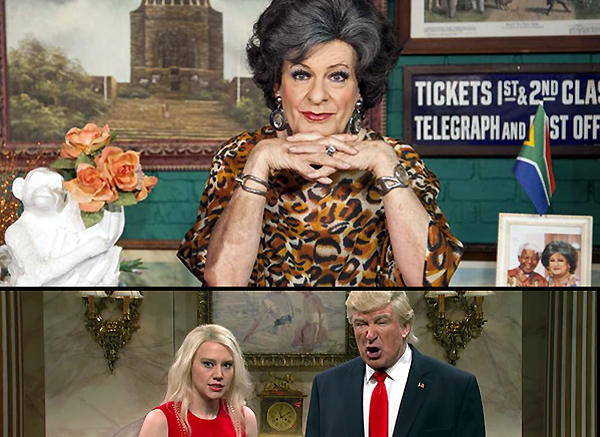 The alt-right may be ecstatic, but the majority of us in the world are increasingly depressed. And now guess what? There’s no comic relief.

A much watched tongue-in-cheek news podcast in South Africa recently replaced twenty years of sarcasm with all that’s left: “there’s only bad news.”

I thought of South Africa’s much loved Evita Bezuidenhoutis after watching this week’s opening sketch of Saturday Night Live. Plays on Trump’s naivete if ignorance are less funny now, because they’ve turned out to be real. The news was wrong: Sarcasm is the truth.

Evita Bezuidenhout has been the mainstay for most South African’s regular need for the real story through sarcasm and comedy. Developed in the 1980s by a clever South African playwright, Pieter-Dirk Uys dresses up as a very opinionated old-fashioned grandmother who often starts her podcasts with: “Hi, my name is Evita and I’m a racist.”

Evita is a Capetonian socialite and apartheid sycophant. The two don’t usually go together, because Cape Town has always been a progressive, anti-government enclave. Her short, much-loved podcasts were news constructs that claimed to bridge that impossible divide, but anyone with half a brain knew exactly what she was saying.

Evita was thus able to become one of the few real critics that survived the apartheid regime, a brilliant way for South Africans who opposed apartheid to get their message out.

It was a draconian time under apartheid. The regime’s “banning law,” for example, gave local prosecutors the right to do virtually anything. Although a prosecutor’s banning order could be challenged in the courts, it couldn’t be stayed. So when an artist’s painting, for example, was considered anti-government, it was “banned.”

How did that work? Sometimes, in very creative ways. In the case of Norman Catherine, his canvasses didn’t have to be surrendered to authorities, they didn’t have to be removed from your walls or taken out of galleries, they just had to be turned around so that the painting faced the wall.

Evita was never banned, because she “supported” banning.

It may have worked in the past, but Evita’s oomph seemed punctured in her last episode, exactly as a few jokes in the SNL sketch seemed to the audience Saturday night. Raucous laughter was interrupted by silent, long faces.

So what’s left to make us laugh?