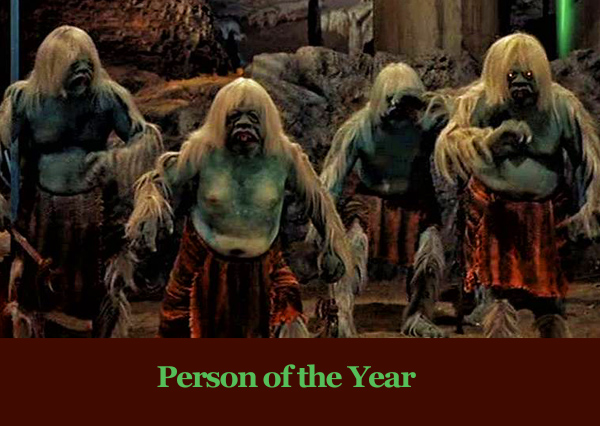 Why was Anna Galland so happy last night? Who will put peerless pen to my personal petulance? I found him. In South Africa.

Trump is “Nazi sludge…trapped in a Twitter feedback loop as a gift for a riled-up white electorate who had seen the ass-end of globalisation.”

This born and bred South African says the only reason anyone would accept a job in the Trump administration is because it’s “the easiest way to make a buck.”

Richard Poplak trained as a filmmaker and has produced a few but he’s really a writer, a frequent contributor to South Africa’s Daily Maverick where this particular piece about Trump appeared today.

It’s not a diatribe. It would have been considered a diatribe by Mrs. Bruner, my English teacher in the 1960s, but today it is no less a diatribe than fake news is erroneous. And that’s Poplak’s Point:

2016 is the year “hate came pouring out our routers.” He unilaterally named “The Troll” person-of-the-year.

“Social media in general, and Facebook in particular … has ushered in an era … gently described as “fake news”, but is really a sustained attempt to send democracy on an annihilation course with demagoguery.”

His somewhat funny, somewhat self-denigrating but in truth terrifying piece compares the era of Trump to that of H.G. Wells’ The Time Machine. Don’t stop reading.

(Slowly but assuredly over the last decade I’ve begun to see 1984 coming to fruition all around me.)

“We could easily make a case for stupidity being the definitive phenomenon of 2016. But the wilful, fine-tuned idiocy I’m referring to has less to do with bottomless IQs and hillbilly inbreeding than it does 20 years of ‘net-induced confirmation bias.’ The idiots in the Clinton camp literally thought Beyoncé would win them an election.”

Touchee. “Nope, this entire year was a sort of lengthy ode to the collapse of meaning.”

You see, what I missed wasn’t the truth, I always knew that. But what I missed was embracing it. I’m still trying to scrape out of the umbrage of my own little bubble of understanding. Until now I didn’t consider the reality of the Machurian Candidate scenario or the deliberate meanness of the alt-right. I’m ready to do it. Poplak got me going: I’m ready to call evil, evil.

We know the Puppet Master 9. He’s not Trump, who’s the dummkopf and the best fall guy there ever was when needed. He’s not even Pence, who sort of slipped on the sludge and came right side up by chance. It’s the consortium. It’s the being of the alt-right. It’s the hundred Cisco tied board rooms of sweating elites each with their own finger on a red button:

“Their gods are deregulation and privatisation, and they’ll worship them in the new American Shangri-La they’re about to build. Their job is to keep feeding meaninglessness into the meme generator, as cover for strip-mining the country planet into extinction.”

The clock’s struck back. Time to fight back.