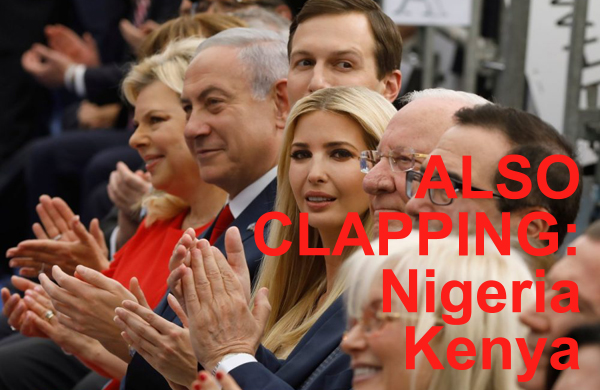 Wonder if we’re in a new cold war? Take a look at how Africa responded to the opening of the new U.S. embassy in Jerusalem yesterday.

Two-thirds of the 32 countries attending the ceremony were from Africa. Kenya, South Africa and Nigeria – normally close allies and the powerhouse of much of the continent – took different positions: only South Africa protested, recalling its ambassador.

Folks, in the panoply of world catastrophes today it just doesn’t matter whether the U.S. embassy is in Jerusalem or not. There was terrible violence as a result yesterday, but it hardly reached the level of most days in Syria or many in Iraq or quite a few in the South Sudan.

What’s so important to understand is that the issue of where Jerusalem belongs in the quilt of global politics is totally and completely symbolic. Symbolism has value but only in a world of established facts. We don’t have established facts, anymore, so the symbolism is meaningless.

So what really matters is who’s supporting who.

Israel has controlled the entire city of Jerusalem since the end of the 1967 War. No embassy has moved there, though, for fear of jeopardizing the peace process.

Only Uganda in East Afica didn’t party. Another way of looking at Jared Kushner’s guest list yesterday is a string of countries angling for US aid.

Uganda has been out of favor with Israel ever since the Entebbe raid. South Africa doesn’t need Israel aid or Israeli investment. It recalled its ambassador.

Basically, the list of countries that joined America in celebrating the opening of its new embassy were – in Trump’s exact own words – ‘shithole’ countries.

Intellectuals in the African countries deferred to their leaders’ decisions.

Kenyans see that as progress. A deeper analysis of these figures reveals that the Cold War of the 1960s and 1970s actually boosted Kenya’s fortunes faster than ever. Africa was courted lavishly by the U.S. and its western allies, Russia and China.

Huge amounts of money were thrown at a country just to get its support in global arenas – like, say, an embassy opening. Careful thinking Kenyans see the opportunity has come round, again.

Ethics, morals, religion – throw it all out the window. It’s Pay for Play like you’ve never imagined.

Might you not do the same? What skin is it off Kenyans’ back to throw flowers at an arch? There’s a raging war of terrorism on Kenya’s borders. It hosts the largest refugee camp in the world. Climate change is ravaging its countryside.

Those are hard, every day facts that prick the skins and stop the hearts of every day Kenyans. What does a building opening in a contentious land that’s been in conflict since homo erectus have to do with getting enough food on the table Thursday?

I think Kissinger called it realpolitik. Like the half billion check China cut to the Trump organization to reverse regulations that destroyed a Chinese telecom.

So a bunch of ‘shithole’ countries are now supporting Trump. What’s the next move?