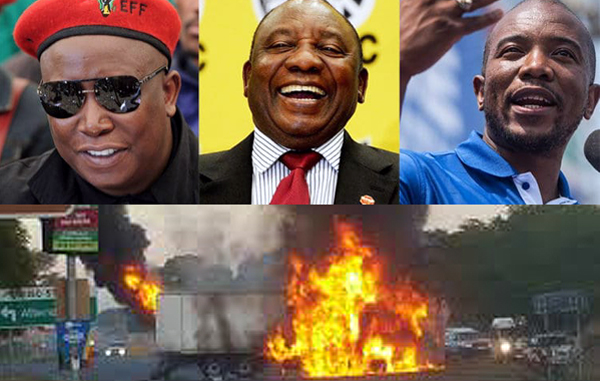 Americans, please pay attention to the May 8 South African national election.  Your future’s being told.

The #totalshutdown campaign sweeping across South Africa is crippling the country, intentionally as a prelude to the upcoming elections.

It’s not political. Does that sound weird? It’s impossible to say which side in the hotly contested election will benefit from this current national insurgency, although the far left parties are trying to invest themselves in it more than the other parties.

The issues are as diverse as whether the old South African apartheid flag be banned (totally identical to America’s battles with Confederate flags and monuments) to “service delivery,“ as meaningful as that isn’t.

What we have is a country in managed mayhem. Tourists strolling down the Company’s Garden in Cape Town won’t notice a thing. Tourists in rental cars are noticing a lot as town after town piles stones on main roads to stop traffic.

South Africa is uniquely posed to handle mayhem. In the half century run-up to the end of apartheid mayhem was a part of daily life. The country became schizoid then and it’s retained the benefits, today.

I doubt that if America deteriorates before a national election the same way South Africa is, today, that it will seem as “manageable.” This will be something new for America, and I don’t doubt it will happen. Prepare yourselves, yanks.

The situation in South Africa reflects a wicked, uncontrollable frustration in almost every part of the world. Better educated, better fed, better off people are learning that they’ve been shafted by the elite: that they’ve made the elite elite without anywhere near fair recompense for having done so.

Since existing political systems — whether democratic or autocratic — are obviously responsible for this gap in benefits, those systems are having a dickens of a time trying to deal with it.

They aren’t going to be able to. They’re “It.” Old time insurgents like Bernie Sanders in America or Julius Malema in South Africa may be too little too late. The near total stoppage of everything in the big town of Tshwane this morning reflects no support for any specific candidate.

Remember, South Africa is a step ahead of America. Their Trump, Jacob Zuma, fell last year. He was replaced, as Trump would be with Pence, by the current acting president, Cyril Ramaphosa, who is trying to become actually elected president on May 8.

I can’t imagine any other outcome. His opponents are numerous and ideologically diverse, but they’re all a part of the system that the folks in Tshwane are trying to blow up.

South Africa is the apex of this worldwide dilemma, because they’re ahead of the game that can be linearly mapped identically almost anywhere in the world. And today one of South Africa’s most provocative publications, the Daily Maverick, struck remarkable parallels between Biden’s entry into the American election race and the rest of the world.

Jacob Zuma was dumped a year ago February. Running to power in the political chapter that followed, Cyril Ramaphosa is expected to win. Will the country then calm down or blow up?

But unlike our vice presidents the Deputy Presidents come and go in South Africa, and he came in rather late, sort of when those in the know knew Zuma’s time was up. So I think of him more like a Biden than a Pence.

Does any of this matter? Are political systems so crippled nothing established will work? Pay attention to South Africa for some insight.