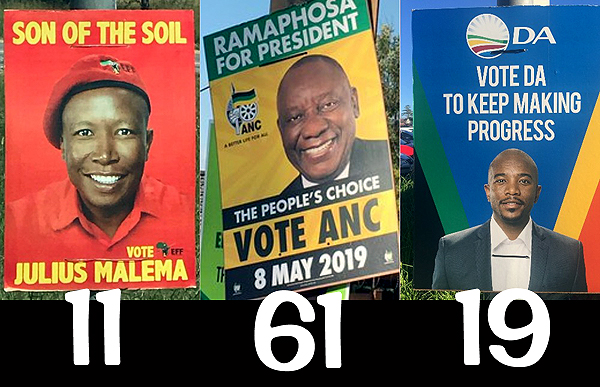 I regularly answer pollsters who call uninvited the exact opposite of what I believe. This isn’t because I advocate lying. In fact whenever a pollster as has happened asks if I’m certain, or telling the truth, I own up to my facade. Rather, it’s to participate in how inaccurate polling is.

Remember the polls for the last couple elections? Well just as a week-from-tomorrow’s grand election in South Africa is an absolute marker for what may happen in 2020 here in America, let’s now start gauging their polls. Perhaps that, too, can be a marker for America.

IPSOS says if turnout is the same as in the last few elections then this will be the national election result by party: (ANC 61%, DA 19%, EFF 11%, IFP 3% and FF+ 1%). The unpacked details of this premier poll are beautifully explained today by South Africa’s Daily Maverick.

Don’t fret that I’m now going into a laborious discussion about the parties; I’m not. You can by reading the Daily Maverick article. My point now is to set us up for gauging if reputable pollsters for national elections are going to get it right this time.

IPSOS is a worldwide polling company based in Paris but with big offices worldwide. It does all sorts of work for all sorts of major political and media groups including many in the United States.

Like virtually all pollsters in the U.S. IPSOS screwed up the American 2016 election. Reuters was IPSOS’ principal client, and six days before the election, IPSOS gave Clinton a 6-point lead.

Just a couple days after the election, mea culpas from news organizations overflowed their ordinary news feeds. Most, like Reuters, claimed they erred because pollsters didn’t really address the electoral college. Clinton won the popular vote.

This is incredibly disingenuous, and I’m personally affronted by such otherwise wonderful organizations as Reuters for taking this tack. Clinton won the popular vote by 2.1%. The pollsters on average including Reuters gave her a 6% lead. Fractions of percentage points determine elections, today.

To me this means the error was fundamental if not intrinsic to the process of polling. In today’s world where lying has become normalized, why are we to believe a compendium of pollsters’ interviews?

So how IPSOS calls next week’s South African election should give us a great indication whether pollsters have discovered how to ignore mischievous people like me, and more importantly, how to find the people who ultimately vote and get them to say truthfully what they intend to do.