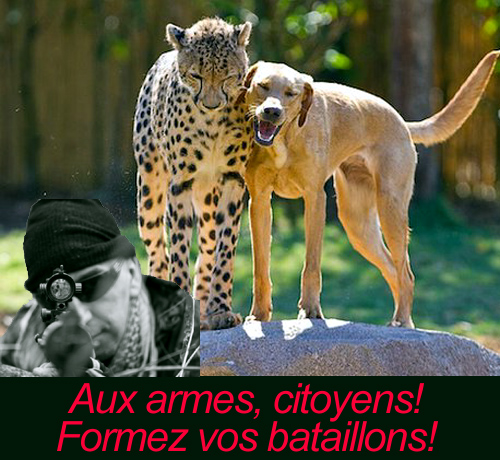 Obama turned down a game drive with his family while in Tanzania, Africa’s most famous safari country, because if he went on one his security would have to be beefed up “to carry sniper rifles with high-caliber rounds that could neutralize cheetahs, lions or other animals.”

This little tidbit provided by the Washington Post – if it’s really true – is another indication of how disengaged Obama is from the realities of Africa. If not the whole wide world.

Lions attack people about as often as neutered male Portuguese Water Dogs do. Those few visitors I know of in my 40 years of guiding that have been hurt by lions have generally walked into their opened mouths uninvited.

Most cheetah are actually smaller than neutered male Portuguese Water Dogs and have a hard time injuring anything larger than a small deer. Here’s how you neutralize a cheetah:

I have personally done it multiple times. You shoo them off your Landrover by swiping them with your hat. And I don’t use hard Tilly hats. I prefer the lighter, less hot thin nylon like Columbia.

We guides are not allowed to carry guns when viewing lions and cheetahs “and other animals” because … well, because we don’t want to kill them. The only reason you need a gun in an African big game reserve is if you’re the predator. Defense and safety against the extraordinarily rare big game aggression against visitors is a matter of the same common sense you would use jogging in Washington Park on an “off-leash” day.

Something that apparently Obama is lacking as far as Africa is concerned.

I have often criticized Obama for his humongous militarization of Africa: for his drone policy, for the troops he’s sent into Uganda and Mali and probably elsewhere, and for the enormous weaponry that he has laid over the continent.

Well, now I know another reason why: He’s worried that cheetahs and lions will disrupt his Africom command.

My God, friends, I’m the most progressive person you probably know and I had such high hopes for Obama. I’m enormously grateful to him for shepherding the country through the Great Recession but I’m having a hard time finding other things he’s approached as a modern adult.

And I came to the conclusion some time ago it’s because he’s a wimp. Unable to stomach a real fight, delirious with the religious idiocy that he can bring people together at a time when they’re committed to slashing each other’s throats, he’s retreated into a child’s world of managing imaginary fears.

Experts like Reich and Krugman who know how banking nearly destroyed the world as well as I know how African big game safaris photograph lions, must be seething just as I am, now. Historians like Goodwin and Beschloss who predict a President’s legacy the way I predict the damage a cheetah on my car will do is limited to chewing off my rubber pop-top roof sealing must spend regular moments inside closed rooms screaming.

We progressives and liberals all are about to explode with bent-up frustrations and false hopes for a man who has obviously been subsumed by the paranoias and institutions of an old and dying world inside the beltway:

It’s lunacy: Obama’s a young man ruled by old fogies who’ve spent their lives looking over their shoulders. It’s the Cheney clique on Bush all over again. How sad that the result is the same, even though one man was so dumb and the other so smart.

Might Obama now arm TSA with “sniper rifles with high-caliber rounds”? Dozens of my own past clients, much less the far more nefarious ordinary travelers in the millions, are much more dangerous than lions and cheetahs “and other animals.”

(I guess that’s it for gun control, eh?)