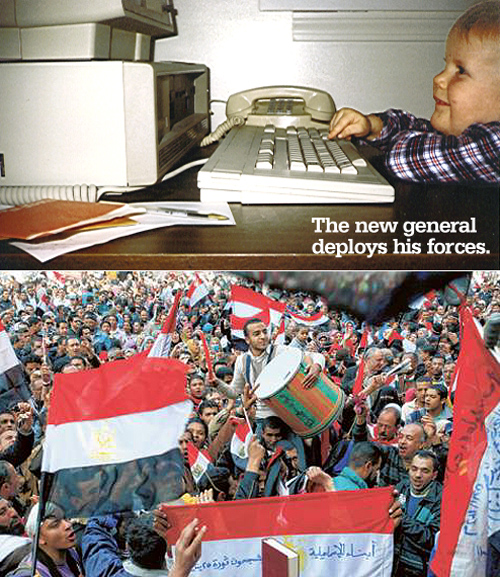 Remember the joke about grandma asking JoJo how to use her remote? Well, get ready you old fogies. Here’s a cheat sheet for the software powering the current Twevolution, and take stock: it comes from Kenya!

That’s right, the Twevolution of Tahrir Square, Pearl Square and likely now even Tiananmen Square is powered by open-source (that means “free”) software from Nairobi. Called Ushahidi (“testament” in Swahili) it is the technical foundation of the revolutions organized throughout Arabia, today.

This remarkable software – and its clones and offshoots – is readjusting world order and I try to simplify it for you grandmas and grandpas below. But the important point of this story isn’t how it works. It’s how it caught world order “off guard.”

I use that cliche, off guard, to represent the dozens of other cliches the media, our government, and most world authorities used to express their surprise at what is happening in Arabia .. (and perhaps much further abroad, like China).

It was a surprise, because this readjustment of world order isn’t being accomplished by tanks and fighter bombers, or even by soldiers or police. It’s being fought and won by the deft manipulation of information. And that is something with little capital cost and virtually no military history. You don’t have to own an oil well to power a street protest.

But you probably now have to have Ushahidi.

Ushahidi was created by several Kenyan kids, spearheaded by the IT genius Ory Okollah, after the 2007 election violence. Okollah is currently the manager of policy for Google in Africa.

What that basic still open-source software does is collect information feeds, organizes and analyzes them.

So, for example, tweets on Twitter, SMS from phones, good ole emails from Google, pictures from Flickr, etc., etc. The software collects them, usually creates a map showing where they come from, and lets manipulators generate outcomes from the analyzed information.

Are protesters being fired on? Where should volunteer medics go? What part of the city do the thugs hold? Who has the hot dogs? Is there a safe place for kids? Has the weather front with rain started in the north?

The more sophisticated software allows organizers to anticipate outcomes based on “if” situations. (In computer jargon, we call it “run scenarios.”)

“If we block the north street into Tahir Square, will we be able to hold the Square?” Ushahidi and its offshoots quickly calculates from the hundreds of thousands of digital feeds that no, in fact, it’s the west street that is most vulnerable and also most able to be secured.

And beyond street strategies, these families of software ask very sophisticated questions.

How many serious sessions has Representative Pete Sessions missed after slipping sideways out of his swearing-in? How did he vote, who voted with him, did it matter, and are yellow lollipops still being sold at his 7-11?

“If we remove the mandate from the Health Care bill, will there still be enough support to make it work?”

FrontlineSMS, Foursquare, Maemo, Waze are some of the hundreds (thousands?) of open-source (remember that means “free”) software that organizes vast amounts of information sent in bit by bit from individual users.

The easiest example is Waze. Waze is used by the under-thirties who commute by car in urban areas. Iinfinitely better than the over-thirties 5-minutes-after-the-hour talk radio report created from an expensive helicopter above the highways, Waze simply collects the real-time whereabouts of its users, figures out who’s getting to work fastest and tells everyone else how to do it!

Ushahidi in its more sophisticated forms organizes all these software organizers. Into one gigantic people power unit.

The manipulators of these sets of software that organizes other organizers are the kids who started Twevolution and ultimately secured Tahrir Square and toppled Hosni Mubarak. They are the possibly poor, possibly underfed, pointedly unarmed but indisputably smart youth of today.

They are our new leaders.

Thursday, what this all means for us old folks. It’s quite astounding!